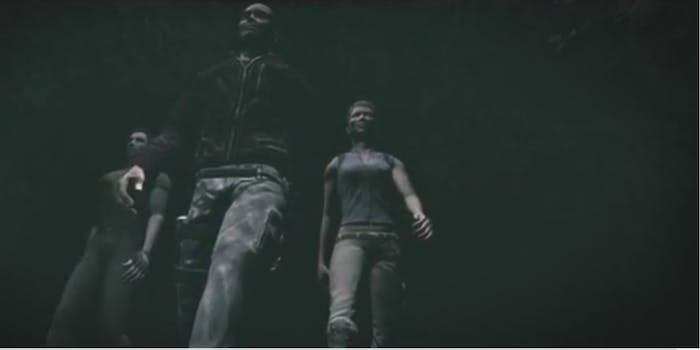 This upcoming horror title makes all your nightmares come true

The truly first-person multiplayer horror game Spectre is planned for the Oculus Rift later this year.

The Oculus Rift, the upcoming 3-D, virtual reality video game display due out later this year, obviously has the potential to change the way games are played.

And yet somehow, nothing has prepared me for a truly first-person horror game like Spectre, a beautiful multiplayer horror game that was a top finalist at last year’s VR Jam and has been attracting attention ever since. The game has earned more than 25 percent of its $15,000 goal on Kickstarter with 26 days to go in its campaign.

On a dark and stormy night (of course), a group of friends finds themselves in a rotting, centuries-old mansion in the middle of vast woods. Blood and dust are on the walls, and whispers are on the wind. Frankly, it’s not looking like they’ll get out alive.

Designed for “classic horror fans, creating film-like suspense and surprises,” Spectre offers two roles: spectre or seeker. Seekers are the naive friends in the mansion, armed with headlights and an urge to flee. Spectres are the ghouls aiming to drain energy from the mortals. The monsters can set traps, project illusions, and cast sounds to confuse opponents.

It sounds really, truly horrible, just as the designers intended.

In addition to the Oculus Rift, the game supports PCs on standard displays and 3-D televisions but it’s ultimately designed for a virtual reality experience.

And it wouldn’t be horror without a reaction video of players who clearly didn’t know what they were signing up for.

Horror isn’t new to the Oculus Rift. Games like Alone in the Rift have waiting breathlessly for the new machine’s release. But the multiplayer addition will add something entirely new to the equation.

Spectre, best played “in a dark room,” is due out in the second quarter of 2014.