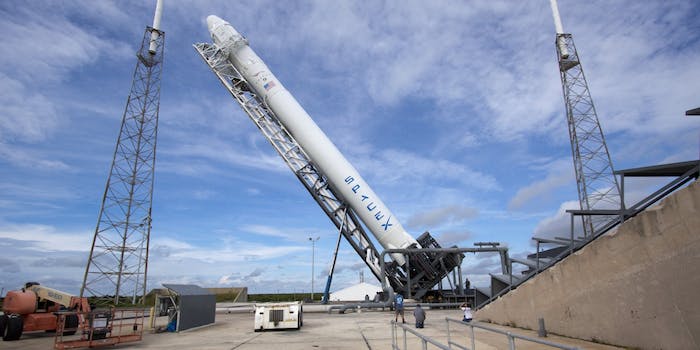 In Cape Canaveral, Fla., an experimental SpaceX rocket launch has been postponed.

SpaceX, Elon Musk‘s commercial space transport company, intended to launch its Falcon 9 rocket on a journey to the International Space Station. The upper stage of the craft, the Dragon capsule, carries 5,200 lbs of equipment for astronauts onboard the ISS.

Journeys to and from the ISS are relatively routine, but this one was meant to be different. Unlike a typical launch, where lower sections of the rocket break away and are discarded mid-flight, the plan was to retrieve Falcon’s lower section. Once detached from the upper segment of the rocket, Spacex would attempt to land it on an “autonomous spaceport drone ship” in the Atlantic Ocean. This would pave the way for future missions where discarded rocket segments are retrieved and reused, cutting costs on space travel.

Liftoff was cancelled just before Falcon’s scheduled launch time on Tuesday morning, after a technical problem was identified in the upper section of the craft.

Need to investigate the upper stage Z actuator. Was behaving strangely. Next launch attempt on Friday at 5am.

SpaceX originally gave the soft landing experiment a 50-50 chance of success, due to the difficulty of landing the Falcon’s lower section on the 300-foot floating spaceport. Another attempt will be made on Friday morning.