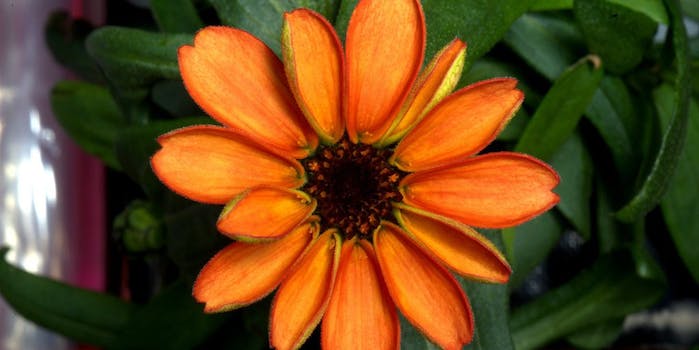 Next year, NASA plans to use this technology to grow tomatoes onboard the International Space Station.

NASA just grew a flower in space, moving us one step closer to creating the life-sustaining space gardens from sci-fi movies like Sunshine and The Martian.

Astronaut Scott Kelly arrived on the International Space Station in March 2015, as part of a year-long mission with Russian cosmonaut Mikhail Korniyenko. The mission’s main purpose is to study the effects of a long-term stay in space, but their presence overlapped with NASA astronaut Kjell Lindgren’s experiments with growing plants in space.

On Saturday, Kelly shared the result of one of those experiments on Twitter.

The ISS astronauts previously harvested their first crop of romaine lettuce last year, but flowering plants like zinnias are far more complicated to grow. Farmed using methods developed by NASA’s Veggie program, the edible zinnias sprouted from “pillows” full of fertilizer, seeds, water and clay, and are illuminated by LEDs.

Some of my space flowers are on the rebound! No longer looking sad! #YearInSpace pic.twitter.com/HJzXaTItIf

In 2017, NASA plans to use a similar technique to grow tomatoes on the space station, adding more fresh produce to the astronauts’ diet.