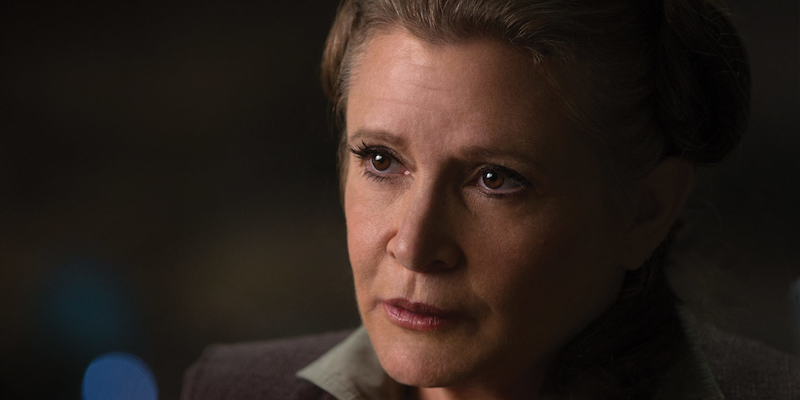 She's the gift that keeps on giving.

Carrie Fisher had a ton of influence over The Last Jedi, beyond her own role as Leia Organa. We already know that she gave script advice to writer/director Rian Johnson (and to J.J. Abrams on The Force Awakens), and Johnson just revealed another way she made her mark on the movie.

.@rianjohnson WHAT'S THE BIG IDEA WITH ALL THIS JEWELRY, MISTER? DOES THE GANG STOP BY A SPACE KAY JEWELER'S? pic.twitter.com/RYrCjnMELU

In response, Johnson said that Carrie Fisher told him “with great urgency” that The Last Jedi should include “space jewelry.” Naturally, he obeyed the general.

If Disney fails to produce replicas of Rose Tico’s crescent-shaped necklace, it won’t be long before fanmade versions appear on Etsy. Not only is it a cool accessory—it also has a meaningful role in the film.

In a new interview with Entertainment Weekly, actress Kelly Marie Tran said the necklace, “is definitely something that is significant to Rose’s backstory. It is an object that she kind of has throughout the film and it is representative of more than the object itself to her… It has significance that is, to me, something that means more than just what the object itself is.”

As for Poe Dameron’s necklace, that’s even more mysterious. It looks like a ring on a chain, and until proven otherwise, we’ve decided that it’s his engagement ring for Finn.