Jason Latour drew the cover of Southern Bastards' 10th issue in response to the tragedy in Charleston.

After the mass shooting at Emanuel Methodist in Charleston earlier this year, the creators of the popular indie comic Southern Bastards put their anger into their art. Then they donated the proceeds of the comic to the fund for the church.

Image has just announced that Jason Latour and Jason Aaron—the artist and writer of the bestselling, violent Southern comic about football, respectively—raised over $18,000 from a variant cover for Issue #10 of the comic, depicting an angry dog chewing the rebel Confederate flag to pieces.

The cover minces no words in conveying the creators’ opinions of the racially motivated shooting: 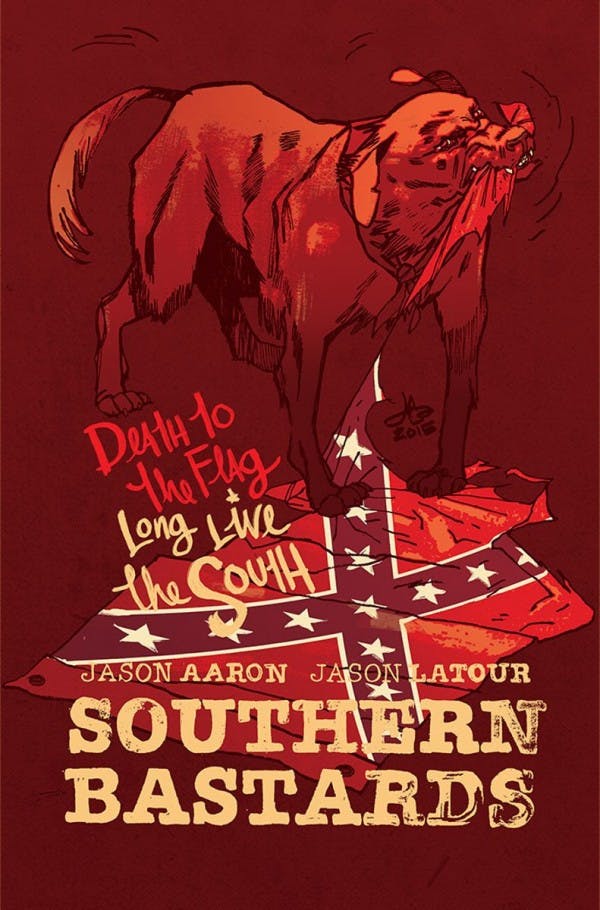 Aaron and Latour announced in June that they would be donating all proceeds from the sale of the variant cover to the Mother Emanuel Hope Fund, which was created by the city of Charleston to support the Emanuel AME church after the shooting. Latour delivered an impassioned essay on Tumblr, arguing that the rebel flag is “a symbol for the belief that blacks and whites are different.”

That we have different places in the world. That we are divided. Even if you remove the horrific acts done in it’s name– That’s what the rebel flag has ALWAYS stood for. It’s what it will always stand for.

And that’s why it’s time for the Rebel flag to disappear. …

I refuse to believe that Southern pride stems from the pain we’ve inflicted on others. Southern pride comes from what we’ve built together. In our music and art and innovation. In the people who honor us by taking our culture out into the world and celebrating it.  It comes from people seeking us out, and flocking here to experience all that we know and love.

We are all neighbors. We are all Southerners. This is OUR culture and it means what WE choose it to mean.

Judging from the sales of the comic, many of their fans agree.