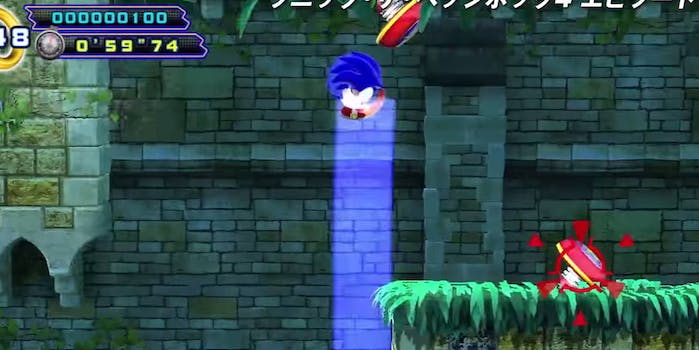 A new Sonic game is coming to mobile

Well, its 2015, and that means new Sonic The Hedgehog games.

The blue blur, which has had a pretty inconsistent track record the past few years, will have another game hitting mobile devices. A teaser for the game opens with music from Sonic and Knuckles’ Flying Battery stage, while telling viewers to “aim for the top.” Currently announced for Japan, Sonic Runners will be a free-to-play- infinite running game with 2D side-scrolling stages.

The premise is pretty simple. Sonic will run automatically, and tapping the screen will make him jump. It’s a lot like Rayman: Jungle Run, except faster.

Japanese gaming publication Famitsu got hands-on time with the game, and according to the translation by Polygon, it will be your standard Sonic fare. You’ll collect rings, unlock Tails and Knuckles, and fight Dr. Eggman. Levels will only take one to two minutes to complete, making it great for playing on the go.

Although the teaser trailer, which pays homage to classic Sonic games, says the game will come out this spring, Famitsu states that it will hit Japan later this month.

This isn’t the first outing for the speedy erinaceidae on mobile devices. We’ve seen games like Sonic Dash, a take on Temple Run, Sonic Jump Fever, a remix of Doodle Jump, as well as classic Sonic re-releases.

We wouldn’t be surprised if it hits the States later this year.