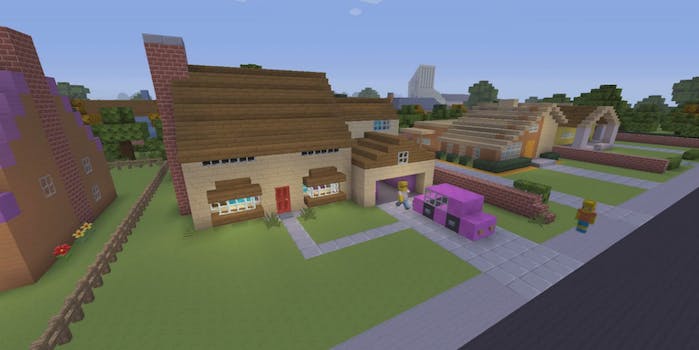 All it's missing is a skateboard.

When Microsoft added The Simpsons themed skins to Minecraft, a recreation of the famous opening credit sequence was inevitable. Now we just need a skateboard for Bart to ride to make the remake perfect.

The Simpsons skin pack for Minecraft includes costumes for the whole Simpsons family as well as a bevy of supporting characters. When the pack went on sale on Feb. 27, Microsoft put a powerful tool to make Simpsons homages into the hands of Minecraft players on the Xbox 360 and Xbox One. But the other star of the show, the town of Springfield itself was something Minecraft players would have to provide on their own.

Now, take an interactive tour of the entire town of Springfield, as built for the title sequence. You can link out to videos that focus on specific buildings, like Moe’s Tavern and Lard Lad Donuts, via text box prompts as you pass those buildings during the tour.

Another inevitability, with the release of Simpsons skins, is the recreation of entire episodes of the show. Anyone who wants to get started can pick up the The Simpsons skin pack for $1.99.