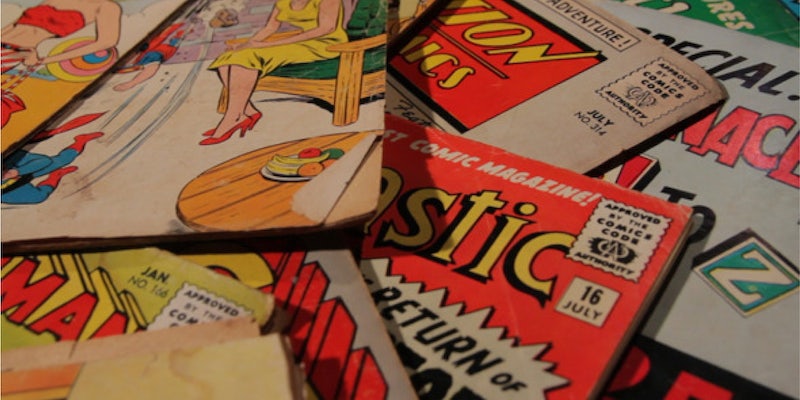 Infographic demonstrates how all superhero TV is basically the same

Feel like you're watching the same show over and over? It's not just you.

The more superhero shows make their way to TV, the more similarities we notice.

Daredevil and Gotham are both gritty urban dramas about organized crime, The Flash, Powers, and Agent Carter are all crime procedurals of one kind or another, and even the upcoming Supergirl and Lucifer adaptations are going to be crime-themed.

The reason for this overlap is simple: TV networks are notoriously conservative, and they want to stick with genres that got solid ratings in the past. That means taking a varied range of comic-book sources and boiling them down into crime procedurals and detective stories about angsty white guys.

Even once you get past the similarities between all these shows about vigilantes, detectives, or government agents, there’s still a ton of overlap. If you don’t believe us, just check out this infographic. 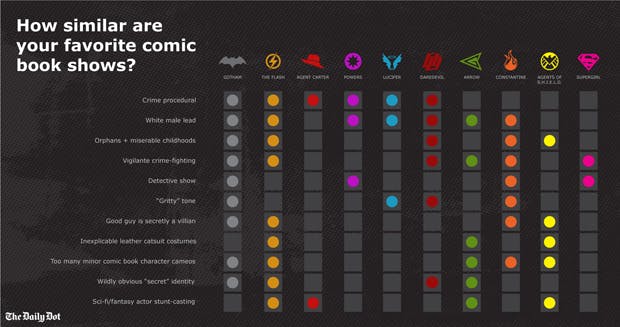 At some point we’ll reach a tipping point for formulaic crime drama/superhero mashups, and we’ll start seeing a more diverse range of adaptations. Unfortunately, we’re not quite there yet. While Amazon and Netflix succeeded with progressive original programming like Transparent and Orange is the New Black, Netflix’s first superhero series was even more formulaic than its network TV counterparts. Although to be fair, Daredevil is still an excellent example of the genre.

Ask any comic-book fan, and they’ll be able to tell you a myriad of different adaptations they’d love to see. A slice-of-life Hawkeye sitcom about Clint Barton and his dog. A 1950s Superman show that mixes Mad Men with Lois and Clark. A kid-friendly Ms. Marvel series that focuses on Kamala Khan’s everyday life as a teen. But even then, you’re restricting yourself to well-known Marvel and DC titles, ignoring non-superhero comics like Saga and DMZ and The Wicked and the Divine. The only current exception is The Walking Dead, which has expanded into an entire franchise.

The good news is that with Kelly Sue DeConnick and Matt Fraction signing a TV deal, we may have a Sex Criminals or Pretty Deadly adaptation in our future. Although not before we’ve been introduced to CSI: Supergirl and an iteration of DC’s Lucifer who cooperates with the LAPD.