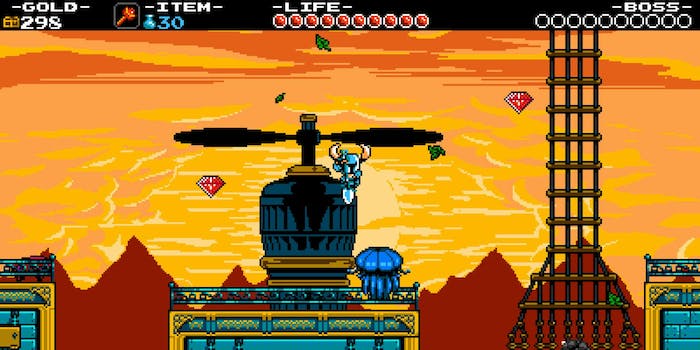 Here's a game we really dig.

Many of us remember picking up the original Super Mario Bros. for the first time back on the NES. There was this sense of tightness in the controls that felt just so right.

Rarely does a game come around that feels so good to play. But Shovel Knight, a new indie game from Yacht Club Games, fits the bill. The game was successfully Kickstarted in April of last year and recently came out for Steam, Nintendo Wii U, and 3DS.

The game has you playing as Shovel Knight, a hero trying to save his female compatriot, Shield Knight, from the evil Enchantress. On his quest he must go through various levels and defeat other knights in his quest for to save his beloved.

Shovel Knight is a 2D platformer, in the vein of Mega Man and Duck Tales. Your shovel acts like Scrooge McDuck’s cane: When it’s in the air, the player can press down on the D-Pad to down-stab enemies. That down-stab can also be used to launch Shovel Knight high in the air.

Precision really is the best way to describe Shovel Knight’s best attribute. Because the gameplay is so near flawless, any deaths are the fault of the player. Although the game can get rather difficult, the controls are never against you. It’s best to play the game with a Wii remote versus the gamepad, because the button layout of the Wii controller is most similar to the NES.

Shovel Knight is a 2D platformer with NES-style 8-bit graphics, but don’t let that deter you. The game has some beautiful sprite work. Characters have charming lifelike movements, and things like smoke or an animal’s tail bouncing around are rendered with 8-bit bliss. Levels all have a distinctive flair with every screen feeling fresh.

The music is most reminiscent of the New York band Anamanaguchi with some Mega Man thrown in for good measure. It has catchy melodies and riffs that give it almost a pop-like feel. Don’t be surprised if you have a few tunes stuck in your head when you’re done playing.

Shovel Knight takes a lot from its retro brethren, but isn’t a shameless copy. You won’t see references trying to pull at your nostalgia strings. The game feels independent, with its own voice and feel. Shovel Knight is definitely a game worth playing for anyone looking for a satisfying game to fill the current summer game drought.