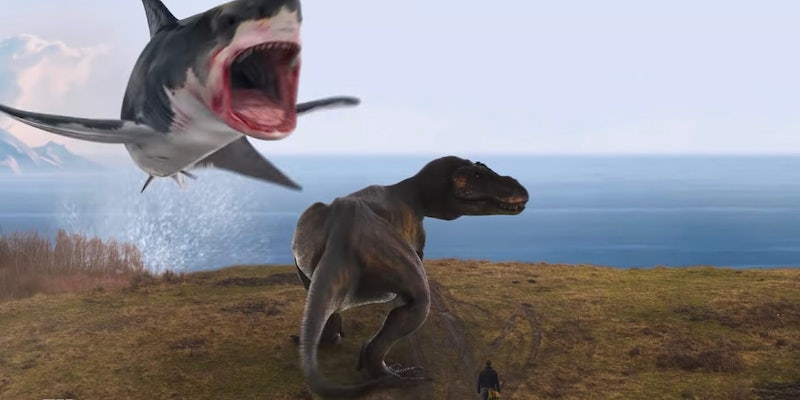 The Sharknado franchise is ending with The Last Sharknado: It’s About Time, and it didn’t hold back with time travel, sharks fighting dinosaurs, and an appearance from Neil deGrasse Tyson.

Over the course of several years, the Sharknado films fully embraced their campiness as shark-filled tornadoes terrorized different parts of the world (and became an annual live-tweeting delight). And in the final film, it’s no different as a trailer teased Fin (Ian Ziering) traveling back through time to stop sharknadoes from forming and wrecking his life in the first place.

The sharks are everywhere throughout space and time as they attack a T-Rex, Revolutionary War soldiers, cowboys, and Fin in a futuristic world. And as the case with any Sharknado movie, the sharks are far from the weirdest thing about it.

The film debuted on SYFY Sunday night with more showings scheduled for Monday, bringing plenty of laughs for those who had no idea what they were watching and for those who were all on the shark-infested tornado train. Once you suspend your disbelief in a major way, it becomes quite the ride. Naturally, the internet was in love.

#Sharknado's commitment to justify the science behind sharknados has resulted in a Neil deGrasse Tyson cameo. #Sharknado6 pic.twitter.com/CsOTvOWF5V

Don't EVER give up on your dreams cause they made SIX Sharknado movies so anything is possible.#Sharknado6

Watching #SHARKNADO6.
Me: Why does the robot head need to recharge? She’s nuclear powered!
Husband: after six Sharknados, THAT’S the plot hole you finally spot?

Watching #Sharknado6 Quite possibly the best piece of cinematography ever created! For the non believers…I give you this image pic.twitter.com/cJ2tKblnAn

Talk about throwing everything INCLUDING the kitchen sink. #Sharknado6 pic.twitter.com/1QtU7dLDGY

Despite its inherent silliness, it was still a big event for some viewers, one that required customized snacks.

We’ve got our shark cake spilling its guts for #Sharknado6 pic.twitter.com/4i5YBjCfQO