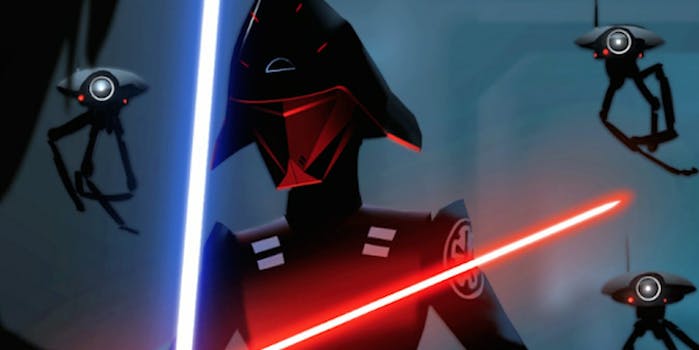 “I may be number seven, but I’m pretty much number one,” Sarah Michelle Gellar tells BuzzFeed about her new Star Wars Rebels character, an Inquisitor called the Seventh Sister.

Although fans learned in March that their favorite vampire hunter would be joining the cast of the popular animated TV series for its second season, they knew nothing about the role she would play until Friday.

Last week, Gellar teased fans by cosplaying as Princess Leia, but it turns out her character is a villain instead. The Seventh Sister is an Inquisitor who uses the dark side of the Force to wipe out Jedi and the burgeoning rebellion against the Empire.

The plot of Rebels follows a band of misfit resistance fighters in the historical period between the Clone Wars (seen briefly in the prequels) and the formation of the more structured Rebel Alliance (seen in the original films). Gellar’s Inquisitor is one of many whose role following the Clone Wars is to hunt down and eliminate the few remaining Jedi.

Freddie Prinze, Jr., Gellar’s husband, voices one of the main rebels, a Jedi-in-exile named Kanan Jarrus. Gellar confirmed that she and her husband’s characters would have several “cat and mouse” moments in season 2.

“My character believes that Ahsoka is back,” Gellar said, referring to an ex-Jedi named Ahsoka Tano, voiced by Ashley Eckstein, who began life in The Clone Wars TV series and returned to Rebels as a guide for our heroes. “She is trying to track down Ahsoka as well as the rebels—and, just, kill them all!”

“It’s good versus evil, and love and triumph, and equality,” Gellar said of the eternal and universal popularity of the Star Wars mythos. “That’s not gender-specific.”

Referring to several of the dynamic female characters on Rebels, she added, “they’re different, they’re cool, and they fight for good.”

You can check out Gellar and the rest of the star-studded voice cast when Star Wars Rebels season 2 returns to Disney XD on Oct. 14.