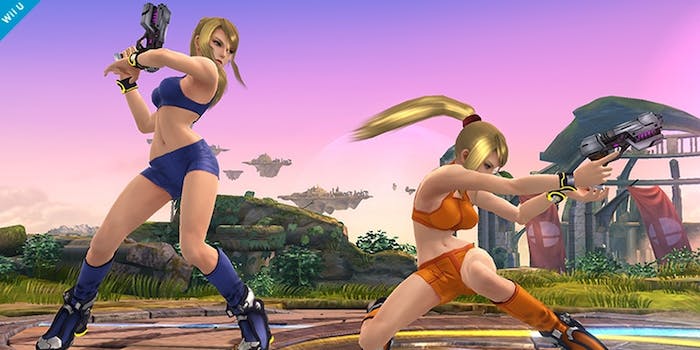 Is this Super Smash Bros. outfit too sexy?

A new clothing option for Samus in Super Smash Bros. has reignited a long-standing debate.

Remember playing the original Metroid back on the NES? You were a bounty hunter named Samus Aran, tasked with chasing after space pirates.

Most players went through the game assuming the bounty hunter, like most video game protagonists, was a man. But at the end of the game, players were surprised to find a lady beneath the character’s armor. You were playing as a woman the entire time.

Nintendo will release the fourth Smash Bros. game for the Wii U later this year. In the battle game, you will be able to play as Zero-Suit Samus from the end scene of Metroid Zero Mission, in addition to Samus with her regular armor. Zero-Suit Samus is faster and more nimble, but not as powerful. Some fans have questioned the sexy direction Samus has taken over the years, but Masahiro emphasized that a female designer was the one who created the zero-suit costume.

Maybe his intent was to curve away any accusations of sexism or over-sexualization of Samus, but that didn’t stop fans from discussing it.

Many are debating if the suit—which has already appeared in multiple past games—is sexist.

Dear everyone upset about the “Samus in a sports bra” thing, You are 27 years too late pic.twitter.com/nxEEew22wc

YES I KNOW Samus used to be more muscular. NO OBVIOUSLY I’M NOT happy about the changes to her http://t.co/GRMeC86BZc pic.twitter.com/jgx5yuBxtq

I’m baffled with the response people have had over Samus’ Zero Mission outfit. Nods to fans are now bad?

As more gamers chime in on the issue of how female characters are portrayed, and the balance of what’s happened in the past versus heading to the future, these discussions are likely to continue.