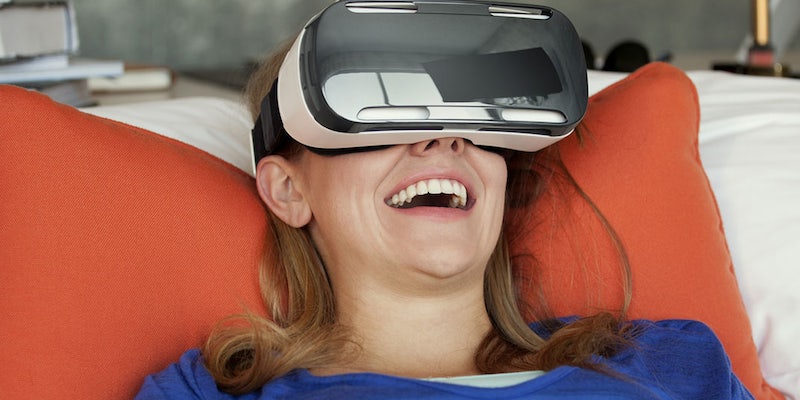 And the first across the finish line in modern VR gaming is—Samsung?

It may not take the form we expected, but virtual reality as a consumer product, not just a demo for tech industry insiders or convention-goers, is finally real.

We reported in August the rumors that Samsung was developing a virtual reality rig, and the speculation that a partnership with Oculus might be in the making. Then on Wednesday, Samsung revealed Gear VR, a virtual reality rig designed specifically for the Note 4 smartphone.

Samsung is not competing with Oculus. The companies have teamed up to produce Gear VR. And this makes perfect sense—the Oculus Developer Kit 2 or DK2, the most current version of the Oculus Rift available for use, incorporates Samsung technology into its display.

In a hands-on with the new rig, Engadet reports that the graphics on the Gear VR are less impressive than anything shown in Oculus demos, and there’s no paired camera peripheral to track forward and backward head movement. There were no game demos to experience, and the tech only works with the Note 4 smartphone.

Technical limitations and software demo omissions notwithstanding, after a year and a half of development, Samsung has beat everyone to the punch with the very first, commercially-available virtual reality rig, which will be released later this year.

Oculus won’t commit to even a 2015 release date for a commercial model of its Rift hardware, and Sony’s Project Morpheus also lacks a release date, though it does have a “Japanese schoolgirl’s bedroom” demo.

A partnership between a smartphone manufacturer and Oculus probably comes as no surprise to anyone who’s been closely following the development of virtual reality technology. When Oculus was showing off an early prototype of the Rift with a Doom 3 demo at PAX Prime in Seattle in 2012, another company was giving VR tech appointments in a hotel down the road from the convention.

That other company had nothing to do with video games. They manufactured high resolution, miniature screens like those used in smartphones, and were showing off their products. Their VR demos included Half-Life 2, a car-racing simulator complete with a mock seat and foot pedals, and a VR sim for architects to experiment with designs.

Oculus CEO Brandon Iribe held up his iPhone during that Rift demo at PAX Prime 2012, by way of indicating that smartphones were driving the development of VR technology. Two years later, the announcement of Gear VR punctuates his point.