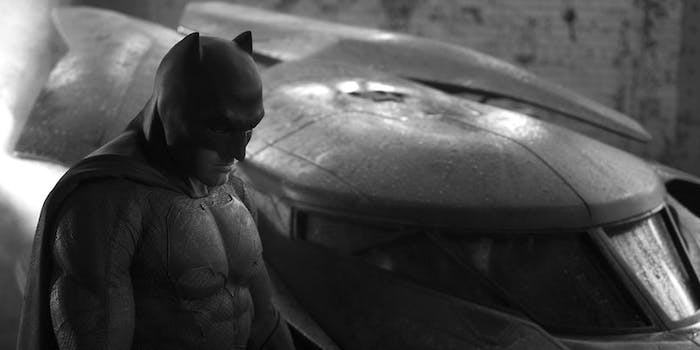 Why is Ben Affleck such a sad Batman? Here are some answers

Is it because his ears are so tiny?

Poor Batman. He is very sad. His parents are dead, and he’s a man in a bat costume with a serious phobia of bats.

Batman really doesn’t have many reasons to smile, except perhaps because he’s a handsome multimillionaire with a cool car collection and luxurious mansion full of secret passageways. But seriously. His life is very hard. You can tell because his latest Twitter selfie is a total downer.

No sooner had Batman/Superman director Zack Snyder tweeted his first picture of Ben Affleck as Batman, than hundreds of fans realized that the photo kind of makes Batfleck look like a sulky, miserable toddler. And thus, #SadBatman was born.

We’ve already commented on Batfleck’s adorable little bat-ears, so it feels fitting to end this tale of Sad Batman woe on a slightly more upbeat note. The best interpretation of this new photo is that he isn’t Batman, but Catman—hence the ears. The only reason we couldn’t tell this was because Zack Snyder posted the photo in black and white, but Twitter user @Syncos2 fixed that for you.