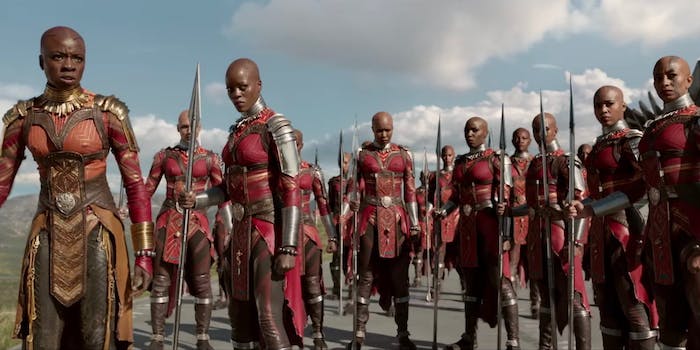 Could we get a female-focused ‘Black Panther’ spinoff?

'That would be amazing if the opportunity came up.'

Appearing at a talk during the Cannes Film Festival on Thursday, Coogler discussed aspects of his film career, including what went into filming Black Panther. He highlighted the process of breaking down the story he wanted to tell (and how), along with how the women in Black Panther—T’Challa’s brilliant sister Shuri, the Wakandan spy Nakia, and Dora Milaje general Okoye—were even “more important” than the men in the film. For him, his favorite part of Black Panther involved the women after T’Challa disappears for a portion of the movie.

“You feel like you are watching something fresh and new,” Coogler noted, according to Indiewire. “These actresses could easily carry their own movie. We had an embarrassment of riches. I would watch a movie with just them. That would be amazing if that opportunity came up.”

When asked if he would want to make a Black Panther spinoff with the female characters, Coogler was open to the idea.

“Oh man,” Coogler said, per Variety. “That would be amazing if the opportunity came up. They did it in the comic-book version.”

Although nothing is set in stone—and Marvel is staying mum on the future of the MCU beyond Avengers 4 for now, a Black Panther sequel is pretty much a sure thing. Letitia Wright, who plays Shuri, is all for it.

Now you just need the rest of Wakanda to get on board.