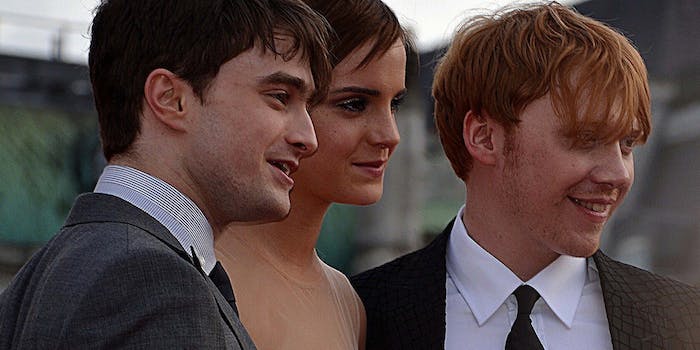 Rupert Grint thinks Ron and Hermione would get divorced

Sorry Ron/Hermione shippers, but it seems another nail has been driven into the coffin of your doomed OTP (that’s One True Pairing for noobs).

At a recent panel with a few of his Harry Potter co-stars, Rupert Grint stated that he believes that in real time, the duo would have divorced by now and that Ron would be living a rather pathetic life on his own.

“I would expect Ron has probably divorced Hermione already,” Grint told moderator Aaron Sagers at a recent meetup at Universal Studios Orlando. “I don’t think that relationship would have done very well … He’s living on his own, in a little one-bedroom apartment. He hasn’t got a job.”

“What!” she exclaimed when she heard his proclamation. “Don’t say divorced. Say they’ve split up. They can reconcile.”

But although Grint downgraded his prediction from “recently divorced” to “briefly separated” to appease Lynch, he seemed to like the idea of a down-and-out Ron, agreeing with Sagers that he’d be “on Tinder doing horribly.”

Neville Longbottom actor Matthew Lewis also got in on the act as well, envisioning Ron “[l]iving in a one-bedroom studio apartment all alone, doing nothing. He lives in Kings Cross, right in that area.” Ouch, low blow.

This isn’t the first time someone close to the Harry Potter series has looked askance at Ron and Hermione’s relationship as an endgame, happily-ever-after kind of ship. During the making of the films, Steve Kloves, who wrote the screenplay for all seven movies, told J.K. Rowling he thought Harry and Hermione had a few “moments,” and Rowling eventually agreed.

Later, she went even further, noting she had doubts about which of the dream trio Hermione eventually ended up with, and that “distance has given me perspective” over what she described as a pairing grounded in “wish fulfillment” rather than realism.

Readers of Rowling’s other book series (under pen name Robert Galbraith) can easily deduce that Rowling’s feelings on the subject have changed. At the heart of Galbraith’s Cormoran Strike murder mystery series is a failing relationship between a man and a woman who’ve been together since college. This couple, badass girl detective Robin and her husband Matthew, seem to display many of the characteristics that initially brought Ron and Hermione together. Only in Galbraith’s world, things like Ron’s possessiveness and jealousy and Hermione’s career ambitions are constantly driving the pair apart, and ultimately prove far more divisive than the initial element of attraction that brought them together.

It’s nice to see that Rowling has clearly spent a lot of time deconstructing the problematic aspects of that kind of romantic dynamic. We just wish she’d done it before she actually wrote what Potter fans universally refer to as “One Big Happy Weasley Family.”

For years, long before the final book came out, the Harry Potter fandom used “OBHWF” as shorthand for a predicted series ending in which Harry ended up with Ginny and Ron ended up with Hermione. But while plenty of fans wanted this ending, plenty more used OBHWF as a term of denigration. After the final book came out, this denigration evolved into a repudiation of the final epilogue, in which we see everyone happily married with kids, with the famous fandom phrase “EWE”—short for “Epilogue? What Epilogue?”

These weren’t just fans who shipped Harry/Hermione, but fans who felt the rich and complicated wizarding world Rowling had built would be cheapened through an ending that put the Trio into happy heteronormative couplings. Sure, for a children’s series, giving Harry a tightknit happy nuclear family to atone for his years of loneliness without a family makes narrative sense; but putting all three members of the trio into rosy marriages with people they dated as teens, let alone befriended as children, seemed like a hopelessly outdated view of romance and sexual identity.

It doesn’t help that in Rowling’s interviews and writings about the post-Hogwarts lives of the series’ other teenage characters, she also seems to have paired most of them off into heteronormative marriages with nuclear families. As the first generation of fans who read Harry Potter have grown up and matured, and recent decades have made alternate sexual identities and lifestyle choices more visible, it’s gotten easier to deconstruct that basic narrative: Come on, Jo—they can’t all be straight and married.

So we’re sorry, Evanna, but we have to side with Rupert, here: Ron/Hermione is toast. (Ron/Luna, on the other hand, is an awesome ship.)

But although we love Harry/Hermione, we’re not sure that ship is entirely right either. We’d rather imagine Hermione off on her own, kicking ass on her way to becoming Minister of Magic, while Harry finally reconciles with his long-sublimated lust for Draco Malfoy and Ginny becomes an international Quidditch star.

And Ron? Maybe while he’s alone job-hunting in his miserable flat, he can finally read all those books on feminism Hermione left him when she walked out of his life for good.

Photo via ilonasian/Flickr (CC BY SA 2.0)