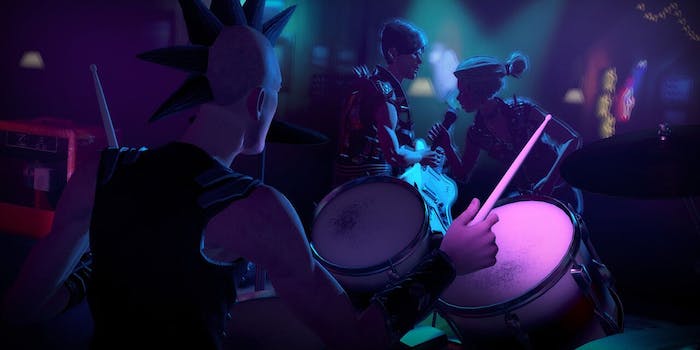 When reality gets in the way of fantasy, sometimes fantasy wins.

If you’ve always wanted to try the drums in Rock Band but shied away on account of needing to use the bass drum pedal, start practicing your drumstick finger twirls.

Ars Technica noticed an important nugget of info in the list of Rock Band 4 updates slated for Dec. 8. “Auto-kick mode” will play the bass drum parts automatically. In other words, you’ll be able to go ahead and unplug that drum kick pedal from the rest of the Rock Band drum set in a few weeks.

That’s a huge accessibility win for Rock Band players who are unable to use the kick pedal at all, and good news for anyone who is bored with the easy difficulty setting on the drum parts.

Generally speaking in Rock Band, the more difficult you set the game the more buttons you have to use and the faster you have to press them. Easy guitar parts only use three of the five frets. Difficult guitar parts use all five. Really difficult parts use all five and you will figuratively break your fingers trying to keep up with the pace as you switch between them.

Where Rock Band drums are concerned, the more difficult the setting the more you have to use the bass drum pedal. Imagine the frustration, then, if you do have the ability to play the drum pads at higher levels of difficulty, but can’t use the kick pedal very well and are therefore stuck on playing easy mode.

The reason people say that you should just play the drums for real if you can play them on Expert level in Rock Band is because playing the drums in Rock Band can be freaking difficult.

In this video, the four colored notes on the music highway are the four drum pads.The orange bar that goes across the entire music highway is a bass drum hit that requires you to step on the drum kick pedal.

Just playing the regular notes is bad enough. Do you have the coordination to also master the kick pedal, when it requires an entirely different set of muscles, and the ability to keep track of complex rhythms?