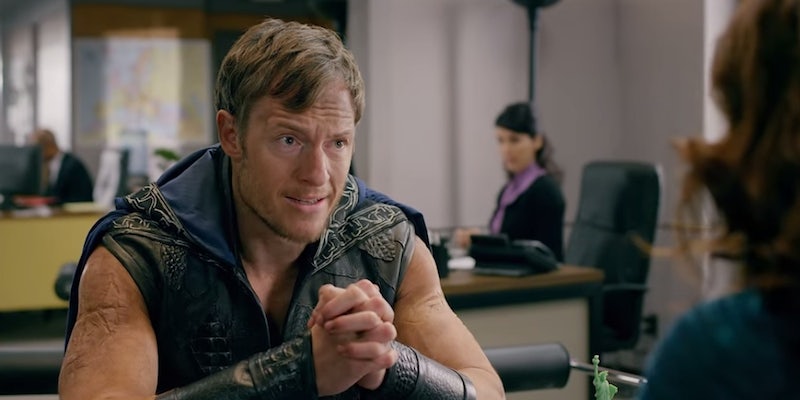 Tahmoh Penikett is one of those actors who has carved out a sci-fi/fantasy genre niche for himself. Best known for playing Helo in Battlestar Galactica‘s modern reboot, he’s since moved onto Joss Whedon‘s Dollhouse, Supernatural, and now a fantasy romcom about a cape-wearing wizard who steps through a portal into modern-day Canada. It almost goes without saying that this latest project is being funded on Kickstarter.

Riftworld Chronicles is a webseries spinning off from a 13-minute short film called The Portal, which Penikett starred in alongside Being Erica‘s Erin Karpluk. The Portal (which you can watch on YouTube) feels a lot like the movie Enchanted mixed with a loving parody of fantasy fiction. Penikett plays it straight as the tough wizard character marooned an alien landscape of bland office buildings, with Karpluk playing a travel agent Penikett mistakenly asks to help get him back home.

The Riftworld Chronicles Kickstarter is raising $55,000 to cover post-production costs for the show’s first 8-episode season, which has already been filmed. The filmmakers managed some pretty respectable TV production values on the original short film, and if you enjoy light fantasy and the fish-out-of-water humor of movies like Thor and Enchanted, this webseries is definitely a worthwhile choice for your latest Kickstarter.