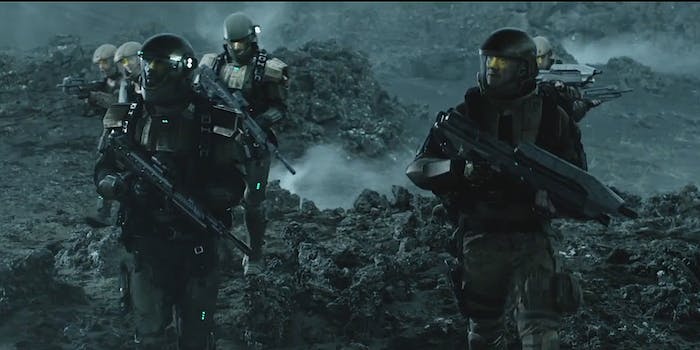 Here’s the first teaser for the Ridley Scott ‘Halo’ movie

And it looks very Ridley Scott-y. Which is good.

The first teaser for the Ridley Scott-directed Halo: Nightfall movie is out, and it looks Ridley Scott-y. Which is good, because it also looks and feels like authentic Halo.

Based on viewing the teaser, Nightfall is about some ONI troops-agents for the intelligence service of the United Nations Space Command, or UNSC-on a search and destroy mission. The footage doesn’t show any Spartans, or super-soldiers, around whom stories in the Halo universe usually center on, however.

Weapon props in the Halo live action series have always been accurate. Seeing what looked like “real” magnum pistols on an assembly line in the very first Neill Blomkamp short was awesome for Halo fans. Look at the uniforms and weapons in this trailer, though, like the same model of aforementioned magnum pistol. It’s very pretty.

Nightfall is a prequel story to whet the audience’s appetite for Halo 5: Guardians, to be released in in the last quarter of 2015. Nightfall is also an enticement for gamers to purchase the Master Chief Collection this fall, as it will be included alongside the three games on the disc: Halo 2, Halo 3, and Halo 2 multiplayer, all updated for the Xbox One.

Nightfall is part of the rich backstory of the Halo universe, and an addition to a long line of successful live-action shorts and commercials.