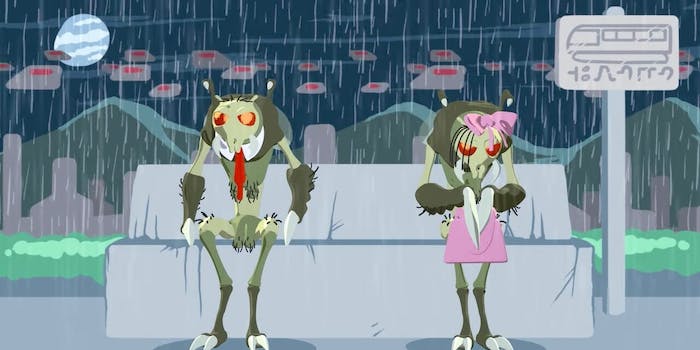 The titular characters of Rick and Morty have killed countless aliens throughout three seasons (and counting) of interdimensional adventures, but one fan film is giving viewers an in-depth look into one of the many lives they’ve ruined.

In the show’s very first episode, Rick hands Morty a gun to shoot the Gromflomites chasing them through interdimensional customs. Rick assures Morty that he can shoot them because the Gromflomites are just robots, which Morty quickly discovers is a lie. The first Gromflomite Morty shoots is not only not a robot, he has a name—Glenn—and a wife and children he’ll leave behind after he slowly bleeds to death. Though Morty is sometimes haunted by what he’s done, we haven’t really dived too much into the lives of his and Rick’s victims—until now.

An animated fan film from David James Armsby dives into what Glenn’s life might’ve been like and how he ended up facing off against Rick and Morty. In storytelling worthy of its inspiration, it shows how Glenn met his wife; how he found love, happiness, and later unemployment; and how his life eventually ended on that fateful day. Turns out Glenn isn’t a fan of bureaucrats either.

We can only imagine what else is hiding behind the many, many other lives they’ve ended along the way.