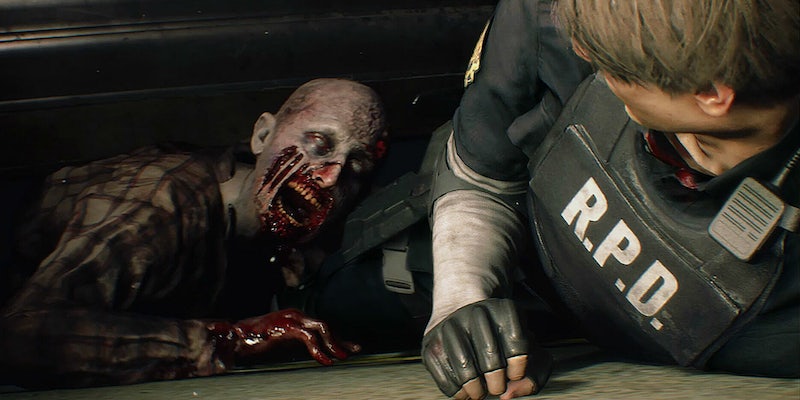 It’s fitting that the first major location in the Resident Evil 2 remake is a police station in a converted museum: Its tight, shadowy hallways pull as much from modern times as they do the past, a perfect symbol for a survival horror experience that knows its roots inside and out, mostly for the better.

More than just a simple paint job, almost everything in Resident Evil 2 has been rebuilt from the ground up, save for a few key similarities. What remains the same is the core of the Resident Evil 2 story: A baby-faced Leon Kennedy is on his way for his first gig as a Raccoon City cop, but his supervisors have been suspiciously quiet. Meanwhile, the self-reliant Claire Redfield is desperately searching for her brother, S.T.A.R.S. operative Chris Redfield. After meeting up early on, the two are almost immediately split up again and cut off from help, taking refuge in the no-less-dangerous police station nearby. And just as it was in the original, you can play two separate campaigns based on which character you choose.

Here’s the thing with reviewing remakes of video games: Is it enough to simply list out the differences and similarities between each installment? I racked my brain trying to figure out an elegant way to compare and contrast, but quickly enough, an entirely different, far more modern game came to mind. Resident Evil 2 doesn’t feel like its original incarnation. In parts, it doesn’t even feel like trendsetting Resident Evil 4, which brought an over-the-shoulder viewpoint and a heavier action focus to the series. Don’t even get me started on the series revitalization with the first-person Resident Evil 7. (Full disclosure: I jumped onto the series with Resident Evil 4, but count me in as a diehard appreciator of all the schlock the series has brought to the industry.)

Resident Evil 2 feels like Dead Space. It’s the closest thing we’ve gotten to that ill-fated franchise (’sup, EA) since 2013. Though certainly Dead Space as a franchise leaned heavily on the innovations of RE4, this remake seems to reverse that relationship: The way that Leon and Claire move through their environments, the density and methodical pacing (and semi-logical layout) of each claustrophobic hallway, it all evokes the USG Ishimura. There’s the way Leon handles as I slowly turn each corner, his flashlight washing over anything that moves, and everything that remains unnaturally still. A bit of police tape flutters in the wind, and rain pours through a broken window, echoing every sloshy footstep for every creature of the night to hear. When I hear a rustle and a moan from behind, and suddenly a perfectly docile corpse has risen and started bearing down on me, my feet smoothly pivot to retreat instead of turning like an old Abrams tank. With each step back I take, my pursuer’s rotten legs bend and twist, throwing off my careful aim and heightening the hair on the back of my neck. That sense of drawing back and letting the gory bastards come to you, that’s what we third-person horror fans have been missing.

It’s a good reminder why the Raccoon City police station is such a classic horror location—another place of security and familiarity perverted by the writhing masses. That its layout is simultaneously easy to memorize and easier to get cornered in speaks to how well Capcom has redesigned its old trophy horse.

Make no mistake, this is still a Resident Evil-ass Resident Evil game. There are gizmos and gadgets and completely arbitrary jewels to collect. There are peculiar statues and gears to put them into. There is a chess-themed sewer construction company that turns all their keys into bishops and rooks and whatnot. Six of them arranged in a certain fashion open a high-level security door, because of course.

Through it all, you’re doing the standard bit of carefully conserving bullets, grenades, and knives. Gone are the comical roundhouse kicks of Resident Evil 4, replaced by that aforementioned careful retreat. Between the cluttered desks, lockers, and halls of the police station, you’re encouraged to scramble away for some more wiggle room, if you can find any to begin with. Zombies dip and tumble, making it appropriately tense and frustrating to land a perfect headshot (on console anyway), but they can be disadvantaged by blowing off their legs. More than once, I found myself lucky enough to knock a few off their feet, take stock of my pitiful bullet count, and gladly dip out like the survivalist coward I am.

When it comes to Resident Evil 2’s latter half, I can’t say the same for that level of detail and awe. The sewers of RE2 are, to put it mildly, boring as hell after a short boss sequence, although I expect fans of the original might not be surprised by that. There’s certainly far more to each major area, but replacing the dilapidation and grandeur of the police station with brown sewers and sterile Umbrella lab hallways is a letdown, save for a few scripted sequences and an overgrown greenhouse sequence later on.

Like RE7, Resident Evil 2 loves to make players retread through previously explored areas. Maybe it was because we were dealing with a far more isolated and linear path in RE7, but this game seems to ramp up the item collection and puzzle solving to the point of nausea. If I tried to recount all the steps I took simply to escape the police station and move forward on my journey, I’d turn into a mindless creature too. Again, this is pure Resident Evil, and it’s hard to complain about what the series has almost always been known for, but at times it can feel like the game is losing steam early on, especially when some puzzles require some painfully elaborate thinking combined with some boring retreading. It feels like this tug-of-war between the old and the new, and I can’t help but feel like the old won out when it comes to some core pillars of gameplay and puzzle solving.

Of course, it isn’t Resident Evil without a few big bads and even bigger bosses. The deaf but deadly lickers, the bloodthirsty Dobermans, and the plant-like creatures present fun, interesting challenges, especially once you realize you almost definitely don’t have the ammo to deal with them all. All of them are nicely foreshadowed too, making sure you never feel too safe in any corner for too long. The real treat of the Resident Evil 2 remake, of course, is the Tyrant aka T-00 aka Mr. X.

I don’t know how they did it, but Mr. X might be the most terrifying persistent boss character in a video game since Alien: Isolation’s xenomorph stalked us in space. Intimidatingly well-done redesign aside, real applause must go to the binaural audio that permeates the whole of Resident Evil 2. When you’re facing down a small group of zombies or just crawling through a rain-soaked hallway, it’s grand stuff, but when this jerk is hunting you down, it’s positively pants-ruining. Mortal terror seems to triple when you’re not quite sure if he’s above or below you, but you do know he’s only one staircase from finding you. In one particular instance, I dipped into the RCPD S.T.A.R.S. office to elude Mr. X, and casually spent a solid five minutes too afraid to walk back out. Don’t mind me, I’m just making permanent friends with the shrubs and the late ’90s PCs in here. I wonder if they have Minesweeper…

Maybe one of the biggest questions with RE2 is whether Capcom has done anything to improve on the separate adventures that Leon and Claire go on. While our budding heroes are rendered with incredible detail and motion capture, that can’t stop some cringe-worthy acting from putting a big ol’ speed bump in the way. Don’t get me wrong, at least it’s charming in a dopey way. Despite only having just met, Leon and Claire are always super duper gleeful to see each other, only to be comically separated by zombies or an exploding helicopter or something, and seeing our dear baby Leon awkwardly attempt to flirt with the mysterious Ada Wong is something to behold. When it comes to gameplay, however, the two are only marginally different, and though their motivations provide for some unique cutscenes and progression paths, about 75 percent of the core story is the same. It’s laughable how hard the game works to make you go through mostly the same areas, just in different directions.

In some ways, it comes back to the old remaster vs. remake argument. For certain, this is a remake of almost everything the Resident Evil franchise has ever tackled. In no way, shape, or form does it recycle the old tenets of its predecessors; it builds upon them, even if some of them end up feeling a little overblown, like the puzzles. The result is a gorgeous, hauntingly refreshed take on a classic world, with controls that make some got-dang sense in the year 2019, and not a single apology for any of its obsessions with heart keys or crank levers. Resident Evil 2 sets a high bar for future remakes of any franchise. How appropriate, to start this journey in a renovated old museum-turned-police station. Come, feel the history, watch it, touch it, marvel at how anyone a century ago ever got by in this crazy world full of chess-themed electrical plugs. But don’t forget where you came from, and honor those traditions, goofy as they may seem to us now, and you’ll have all the more fun for it.