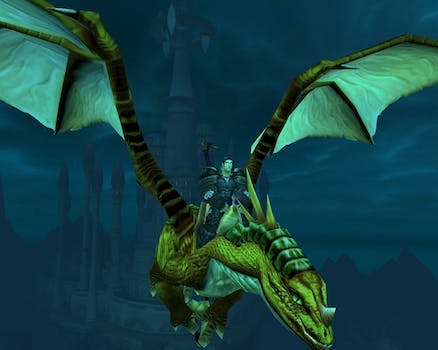 A mourning dad wanted to connect with this son's hobby, but didn't know where to start.

For people who play World of Warcraft, it’s easy to understand the draw of the challenge, the community, and the fun of the game.

But friends and relatives of the players sometimes have a harder time getting it. A man who posted to the World of Warcraft subreddit on Monday said he was one of those people.

He wrote that his son was a soldier injured by a mortar while deployed in Iraq. While in recovery, he enjoyed playing World of Warcraft.

“Recently he passed away and I decided that I wanted to connect with areas of my sons life I never understood,” the man, who goes by the handle Senna1982, wrote. “WOW is one of those areas.”

In the post, which he titled “total noob. no clue what i’m doing,” he asked redditors to help him learn the ropes. For someone who had never played World of Warcraft before, getting into the game was overwhelming.

So im older (late 50’s) and my son used to play lots of WOW while he was recovering after getting hit by a mortar in iraq. Recently he passed away and I decided that I wanted to connect with areas of my sons life I never understood. WOW is one of those areas. I am totally overwhelmed right now. I watched a youtube video and decided instances looked like a lot of fun. I “ran” 2 dungeons this weekend. Whatever druid kept resurrecting me – thanks. I had a lot of fun. I know what clicked with son and it clicked with me. I want to keep playing but right now I feel like a drain on any groups unfortunate enough to get stuck with me. Are there any guides on how not to suck? I’m playing a destruction warlock. I’ve poked around on google but ABP goes nuts whenever I click on a link so I am a bit gun shy. Where the hell do I even start?

Touched by the story, the community immediately responded, offering a massive outpouring of both condolences and tips. The father found the support from strangers on the Internet mind-boggling.

“Since my son passed I have struggled tremendously coming to terms with the new reality I am part of,” he wrote. “I am humbled at the collective love and kindness shown to me—a total stranger—by the members of this community.”

Many users linked to guides, discussed various strategies, and posted their user names so they could meet up with the dad in the game to help him out. 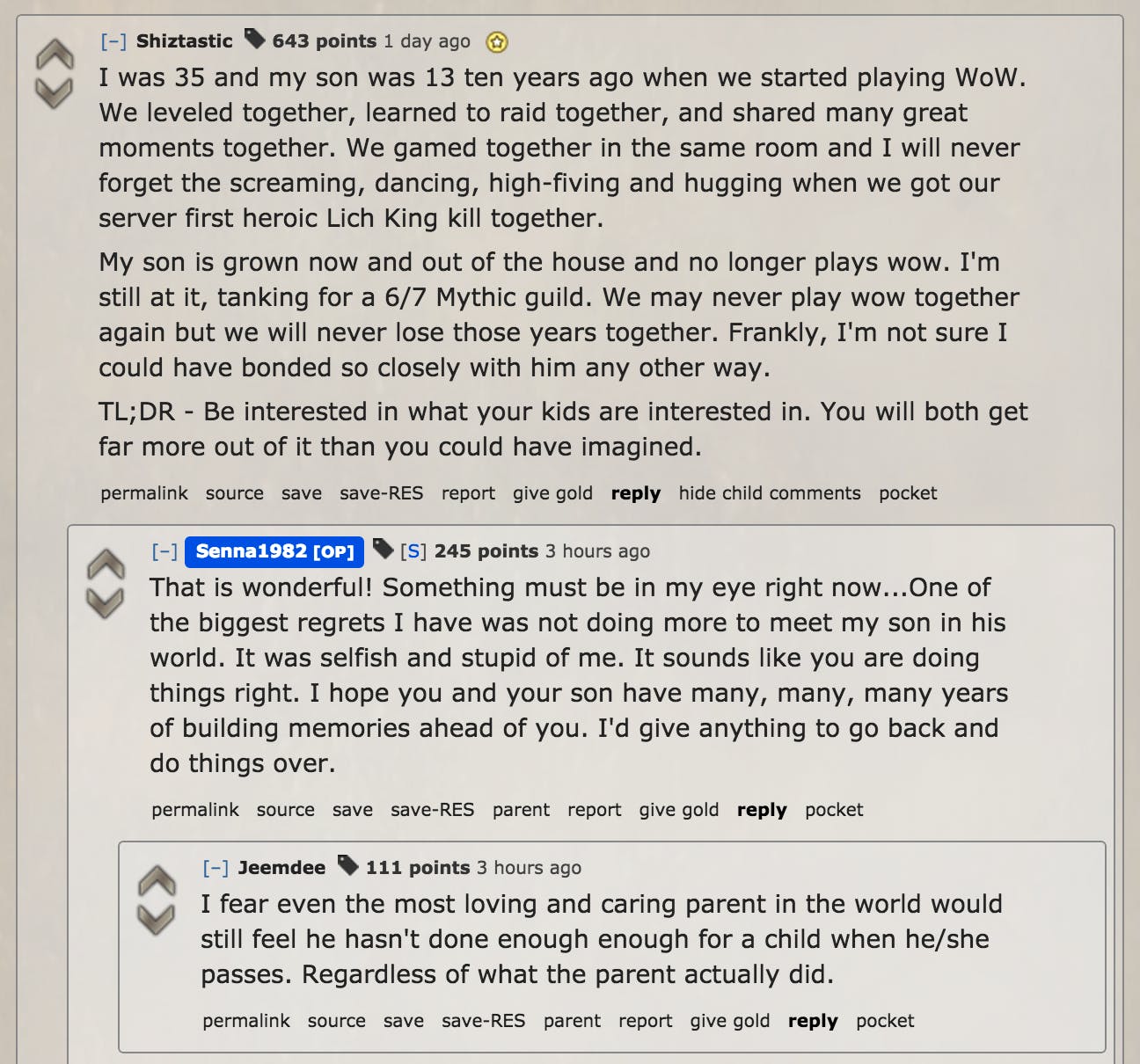 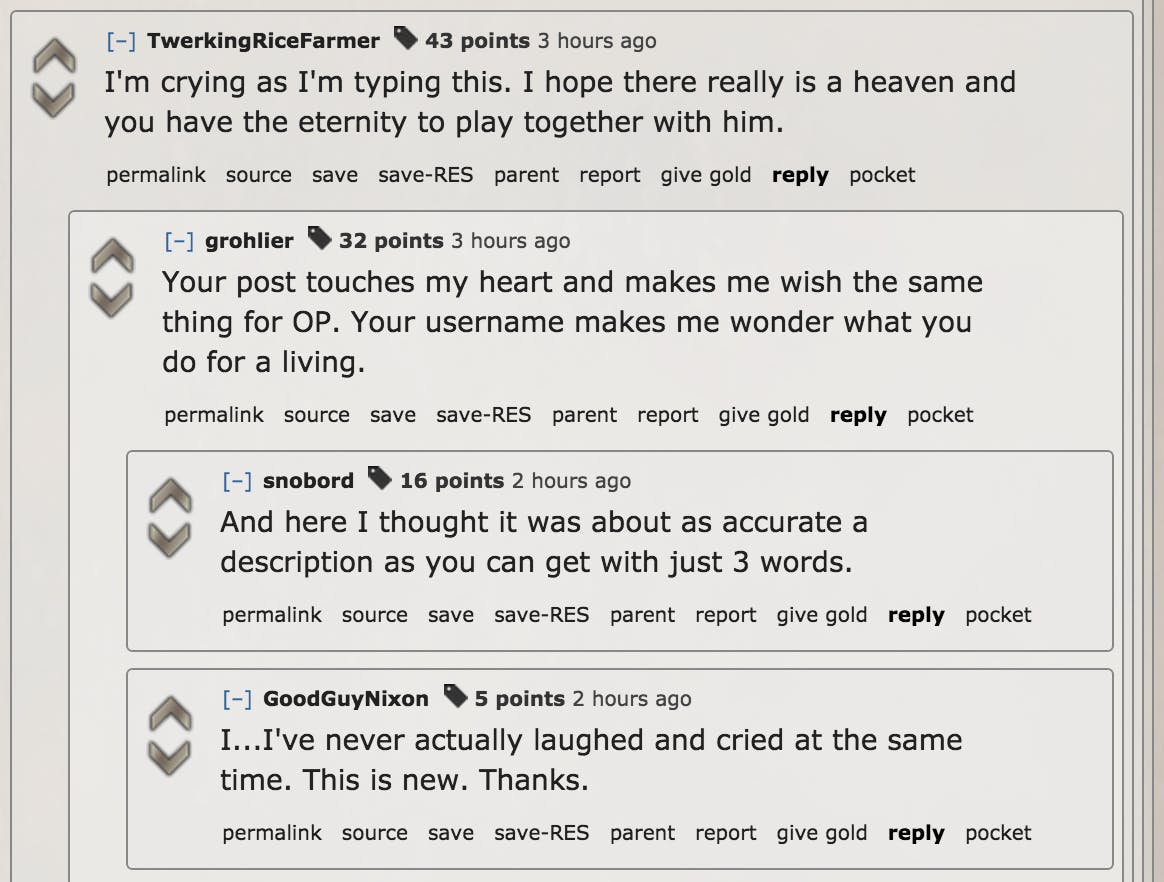 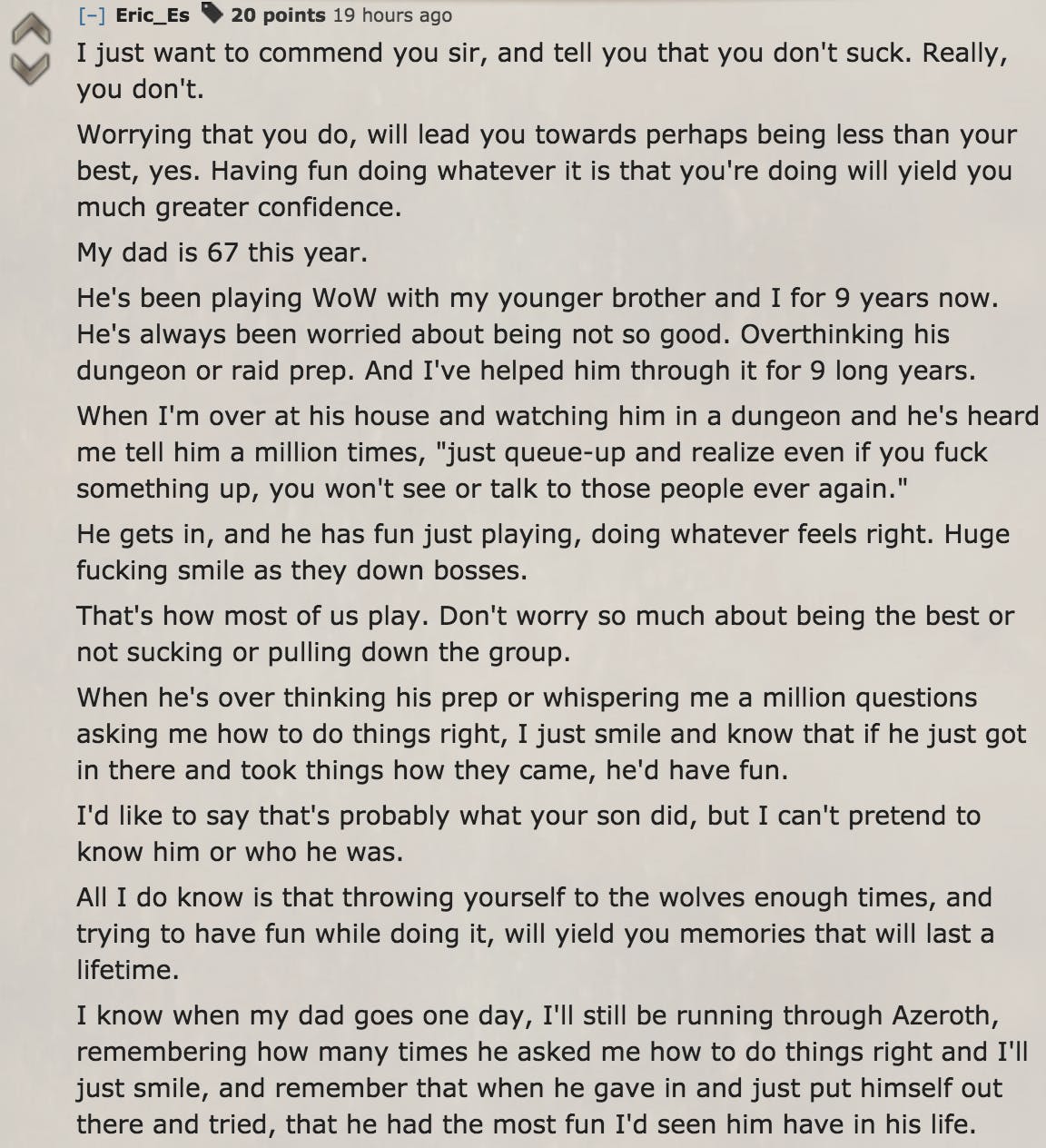 Some redditors said the experience made the want to go hug their own fathers.

“Several of you have reached out to me privately with offers of support and friendship both in the game and in real life,” he wrote. “I will do my best to respond to all of you. Thank you so very much. This means so much to me I can’t accurately describe it.”

Image via Rolo Tomassi/Flickr (CC by 2.0)