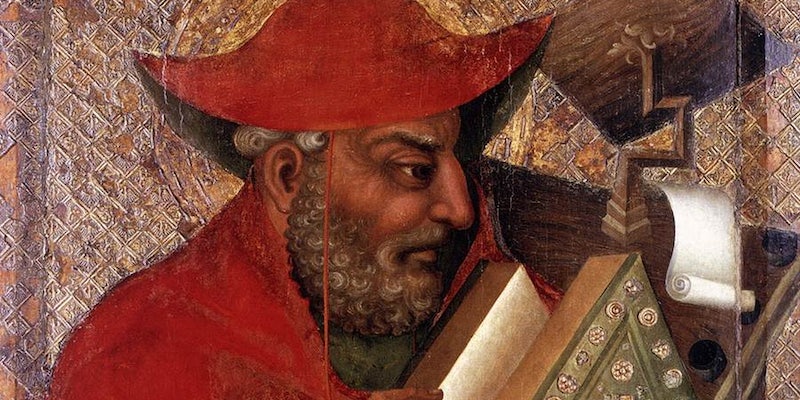 Is a medieval video game historically accurate without people of color?

Does a game that takes place in a small part of medieval Central Bohemia need characters of color?

You’d think this would be harmless enough, but right now its author is on the receiving end of some Anita Sarkeesian-style backlash.

According to its mission statement, the purpose of MedievalPOC is to “address common misconceptions that People of Color did not exist in Europe before the Enlightenment, and to emphasize the cognitive dissonance in the way this is reflected in media produced today.”

It’s become a popular resource during debates over the relative “realism” of everything from Disney’s Frozen to HBO’s Game of Thrones, and often receives messages from people asking for advice when researching racial diversity throughout history.

Last week, MedievalPOC reader tengokujin submitted a question about a video game called Kingdom Come: Deliverance, which is currently being marketed on Kickstarter as a “realistic single-player RPG set in medieval Europe” with “period accurate melee combat.” tengokujin asked MedievalPOC for information regarding any non-white ethnicities that might plausibly be included in the game, saying:

“I asked the devs if they plan on adding any NPCs of other-than-white-descent and received a polite reply of “[In Central Bohemia, there] were, unfortunately, almost none.” A casual search turns up the Mongols, so I figured there’s gotta be more. Do you have any sources or books that would indicate significant presence of other ethnicities?”

Basically, it was an academic question. Now seems like a good time to point out that there was no suggestion that the creators of Kingdom Come should be pressured into altering the content of their game.

MedievalPOC’s reply seemed somewhat unimpressed with the game’s lack of diversity, pointing out the lack of roles for female characters. “I can tell that representation really isn’t a priority there,” they wrote. “For example, their £600,000 goal of adding miniquests in which a female player character is even possible came after “Live Medieval In-Game Music” and “Symphonic Orchestra Soundtrack”, and remains unfulfilled as of yet. However, being able to “seduce local women” is already a part of the base game.” 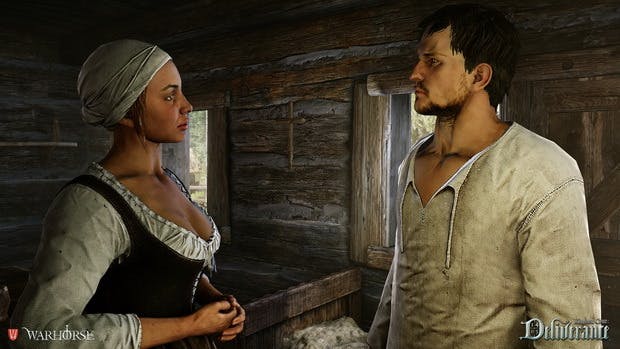 MedievalPOC went on to give a handful of examples of ethnically diverse art from Medieval Europe, along with some reading recommendations to learn more about the ethnic makeup of Bohemia in the Middle Ages. The most critical detail was a snarky line about game’s policy on historical accuracy, saying, “apparently, women and people of color just aren’t realistic enough I suppose.”

Not very controversial stuff, particularly since it was all restricted to a single askbox reply post on a semi-popular history Tumblr.

That is, until the post was shared on Reddit’s TumblrInAction subreddit, under the headline, “Idiot SJW bothers RPG company because their game set in Medieval Central Europe doesn’t have any POC.”

SJW stands for “Social Justice Warrior,” a mocking term for people (usually on Tumblr) who blog about social justice issues such as racism, homophobia, sexism, and transphobia. The supposedly SJW-esque nature of MedievalPOC’s comments seemed to enrage many of the members of the subreddit, who disputed whether MedievalPOC’s claims were remotely reliable, or even relevant. Sample comment:

And since when was including this bullshit, along with proper amounts of female characters an actual concern for videogames? This sort of shit has only popped up recently in the past decade and it pisses me the fuck off to no end.”

The next day, MedievalPOC work up to an inbox full of hate mail, including this gem: 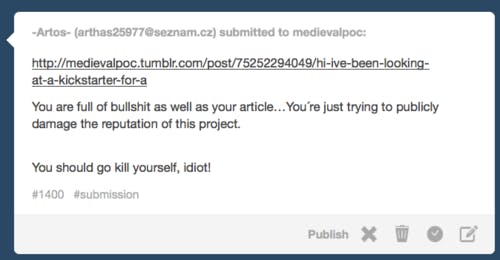 Other messages said things like, “I don’t know where all that unfound hate comes from but I hope you’ll learn to be a little less hypocritical and hateful in your life,” or told MedievalPOC that they should apologise to the creators of Kingdom Come for “lying and misinterpreting.”

MedievalPOC’s response was to delete the remainder of the messages, writing, “No, I do not plan to issue any apologies for writing about history, art history, or a game and its creator’s choices in regard to representation of women and/or people of color (lack thereof).”

But the relative accuracy of Kingdom Come may not even be relevant here. Yes, MedievalPOC’s blog is a goldmine of historical evidence that Medieval Europe wasn’t nearly as white as most people assume. But it’s still plausible for Kingdom Come not to feature any characters of color, particularly since, as one of its developers pointed out to a potential Kickstarter backer, the game takes place over a mere 9 square kilometers of land. Effectively, “historical accuracy” can be used to support both sides of the argument.

The Tumblr drama certainly hasn’t hurt Kingdom Come’s Kickstarter campaign, which has raised over twice its £300,000 ($490,000) goal with two weeks left to go. A quick glance at the Kickstarter’s comments section shows a bunch of people discussing whether they’ll get to wear cloaks or mantles in the game, with nary a mention of racism in sight.

The creators of Kingdom Come: Deliverance didn’t respond to a request for comment.