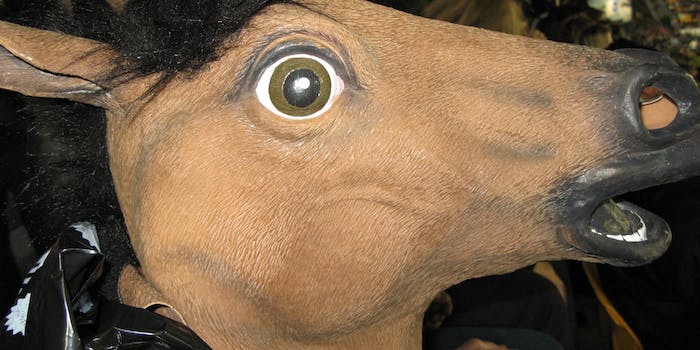 Definitive proof that social news site Reddit takes all kinds can be found at the surprisingly popular subreddit, r/HorseMask.

There are more than 5,000 people on social news site Reddit just horsing around.

Subscribers to the surprisingly popular subreddit r/HorseMask send in pictures of themselves, friends, or complete strangers engaging in everyday activities… while wearing horse masks.

There’s a photo for every topical occasion: “Gangnam Style,” the 1 percent, and hurricane survival.

That nightmare-inducing headgear is the gift that will keep on giving long after Halloween and also proves that the marriage of frightening animal heads and everyday reality can indeed result in comedic perfection.

“I find it funny and tell people just to wear the mask in human roles,” moderator Horse_Glue_Knower explained to the Daily Dot.

“It’s hilarious to see photos with horse mask-wearers doing everything things like buying groceries, ordering pizza and going for a run. When the other mods and I started, we didn’t expect it take off like it did, but it’s been fun.”

“Horses in real life are equally creepy as the mask,” Horse_Glue_Knower said. “The long horse face and bulging eyes are just super strange.”

Day after day, hilarious photos trickle in of horse/human hybrids going about their daily activities. Subscriber loledoutloud shared a picture of himself cutting grass, marking a rare occasion in which the horse gets to be the rider. And how could the wedding of omgmanatees’ sister be any more memorable?

Even the mods, who see every submission that comes through, have their favorites.

“Recently, this one blew my mind as hilarious,” Horse_Glue_Knower revealed.

“The submission for the photo scavenger hunt we had when the sub reached 5,000 subscribers was pretty epic, fellow moderator devilsfoodadvocate added. The winning entry is seen below.

If you feel that the photographs documenting your life are missing something, then “get thyself thine own horse mask” and join your fellow studs and mares over at r/horsemask.