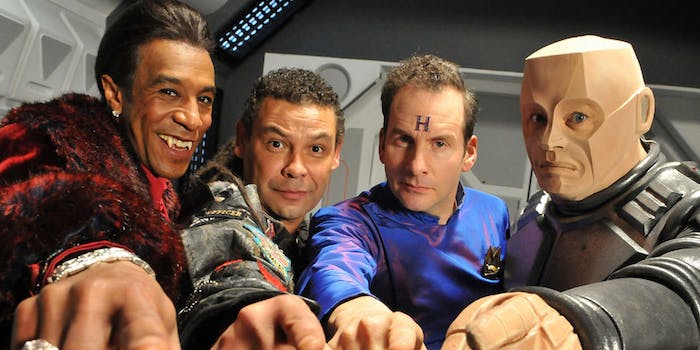 British sci-fi sitcom Red Dwarf is returning for two new seasons, the 11th and 12th since the show began in 1988.

Red Dwarf‘s last reunion took place in 2012, and the show’s cult following is evidently strong enough to warrant another. It will return in 2016 and 2017 for seasons XI and XII, broadcast on the U.K. channel Dave.

The show follows the hapless inhabitants of the mining spaceship Red Dwarf, which was accidentally put into suspended animation for 3 million years after a radiation accident. Low-level crew member Dave Lister wakes up to discover that he’s the only human left on the galaxy, trapped on Red Dwarf with a humanoid creature descended from his cat, and an annoying hologram of his dead roommate, Rimmer.

While the show’s cast has seen some changes over the years, the new episodes will reunite four of the best-known characters: Lister, Rimmer, Cat, and the robot Kryten. Lister actor Craig Charles has spent the last decade on the popular soap Coronation Street, which he is leaving to film the new seasons of Red Dwarf.

Almost as enjoyable as the news itself has been the reaction to it. This show inspires so much love, and keeps getting new fans. #RedDwarf

Red Dwarf is one of the few cult sci-fi shows that actually gets renewed as often as fans demand. Unlike Firefly, which is almost certainly doomed to remain a one-season show, Red Dwarf benefits from being a low-budget sitcom starring British TV actors who still have time to film new episodes every few years. It wouldn’t be a huge surprise to see the show renewed for further seasons after XI and XII, with Red Dwarf‘s fandom still going strong after more than 25 years.