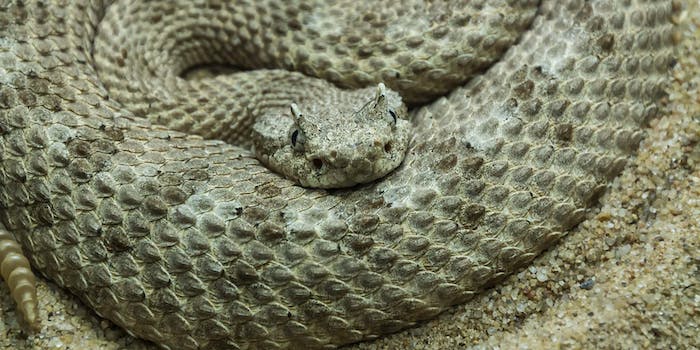 Proving once again that Mother Nature is the world's smartest engineer.

Mother Nature has a lot to teach us about the dynamics of traversing Earth’s habitats.

Early aeronautics inventors studied the shape of birds’ wings to better understand flight. Now, physicists, zoologists, and engineers are getting help from a snake to learn about the mechanics of traveling on sand.

The sidewinder rattlesnake has evolved to thrive in sandy environments. While traveling on granular surfaces is difficult for most animals—even other snakes—this rattlesnake is right at home. It can even sidle up inclines on sand dunes as easily as a person might might walk up a set of stairs. Scientists at Carnegie Mellon University, Oregon State University, Georgia Institute of Technology, and Zoo Atlanta wanted to understand this mobility, so they set out to create a robot that mimicked the sidewinder’s wave-like motion.

What they found, as reported in the Oct. 10 issue of Science, is that as a sidewinder approaches an incline, it increases the amount of body surface it has touching the sand. When the scientists accounted for this variation with their robot, they found it too could climb sandy inclines.

So what does this mean for the future of robotics? The possible applications include search and rescue missions in unstable places like mine shafts, or perhaps even space exploration missions. After all, NASA’s Mars rover Curiosity got stuck in sand while traversing the red planet this summer.