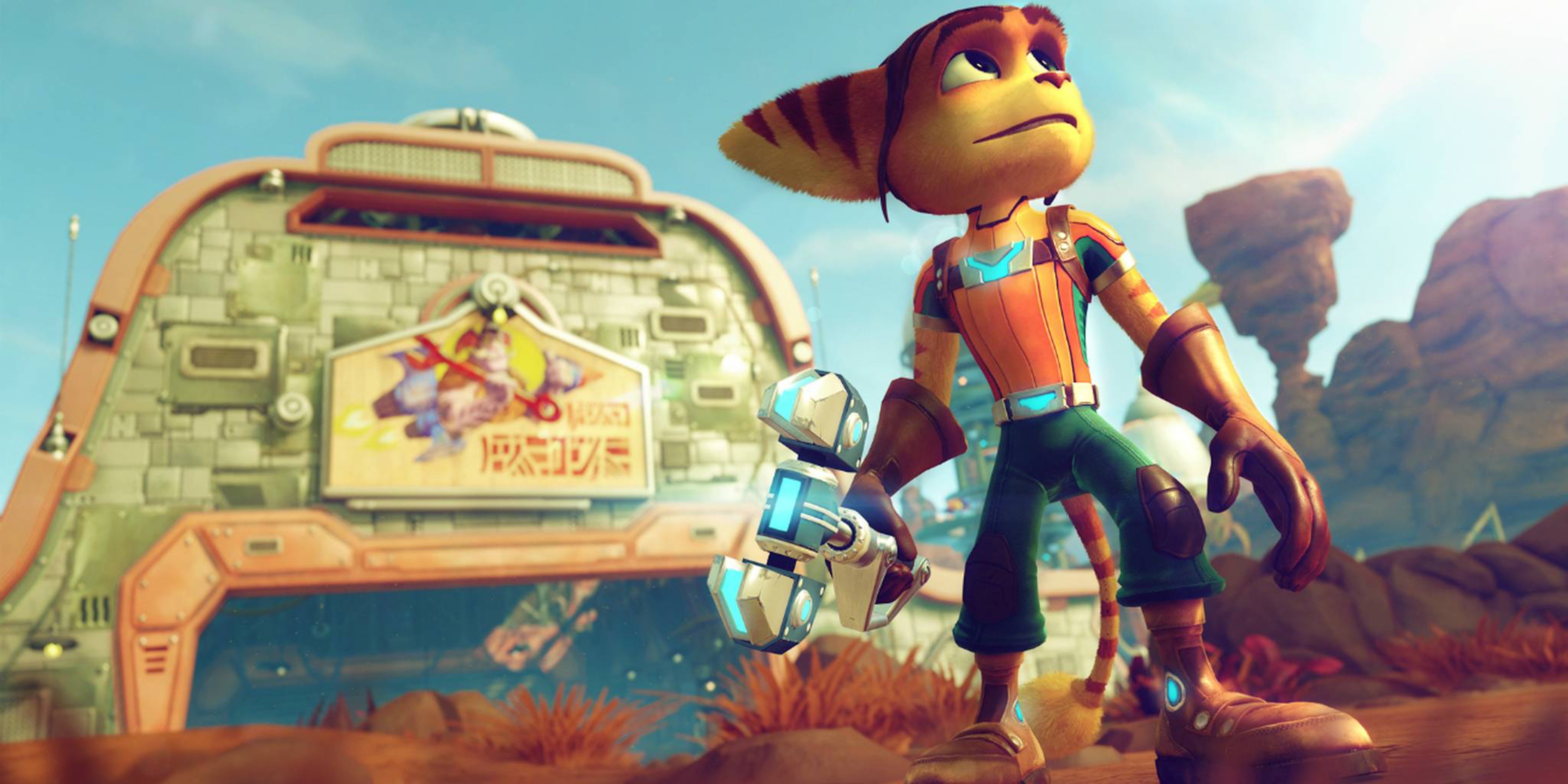 This is the 'Ratchet & Clank' that Insomniac Games always wanted to make.

Ratchet & Clank is the rare franchise reboot that feels welcome rather than contrived. It’s a way for longtime fans to celebrate gaming history and an introduction for new players to beloved characters. 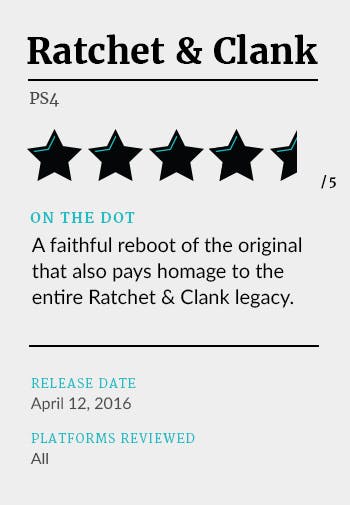 The cartoonish science-fiction universe of Ratchet the Lombax and Clank the robot stretches back to 2002, when the 3D action platformer franchise debuted on the PlayStation 2. This year’s reboot features the same plot, characters, and some of the same locations as the 2002 original. It also borrows elements from different games across Ratchet & Clank’s 13-year history. It was not billed as a strict remake of the original owing to the addition of new content.

Evil industrialist Chairman Drek has ruined Quartu, the homeworld of his species, the Blarg, by covering the surface of the planet with pollution-belching factories. Clank is a defective Warbot who escapes from the assembly lines of Drek’s factories, where the Chairman is building an army to conquer other worlds before building a new home for his people.

Clank’s spaceship is shot down by the Blarg and crashes on the planet Veldin, where he meets a spaceship mechanic and wanna-be Galactic Ranger named Ratchet. Finally given his opportunity to be a hero, Ratchet throws Clank in a backpack, grabs his OmniWrench, and sets off to warn the Rangers of the impending threat.

The new Ratchet & Clank is narrated by Galactic Ranger blowhard Captain Qwark—think Buzz Lightyear but without the rocket backpack or desire to accomplish anything—who also reprises his starring role from the first game. The reboot is extremely faithful to the original story: The Plumber, Big Al, and Skid McMarx also return as Ratchet and Clank’s allies.

Fourth-wall-breaking moments that recognize the new game as a reboot are interspersed throughout the cutscenes, but for the most part Ratchet & Clank’s script is family-friendly and sounds something like a goofy Dreamworks animated film. Ratchet & Clank did get one solid laugh out of me: a fake commercial for a hoverboard race where all the former contestants were signing in from hospital beds.

The planet Kerwan is a metropolitan hub, flying cars winding around the towering skyscrapers like a scene from Coruscant in Star Wars. Aridia is a rocky planet populated by sandsharks. Gaspar is a lava world and the location of a Blarg robotics factory. Batalia is a military base built on a ball of ice, and Pokitaru is a tropical vacation world. The diversity of environments serves Insomniac well by giving the studio ample opportunity to show off just how good Ratchet & Clank looks.

Ratchet & Clank: Into The Nexus looked great on the PlayStation 3 in 2013, but the moment-to-moment gameplay in the new Ratchet & Clank is animated so smoothly and is so bright and colorful that it blends seamlessly into the game’s selection of film-quality cutscenes. The difference between the film footage and the in-engine cutscenes is still obvious, but you can’t have everything.

Most of the platforming in Ratchet & Clank is very basic. Ratchet has a Swingshot laser grapnel hook to swing across gaps, and he can use Clank as either a Helipack or a Thrusterpack for additional height beyond his double jump and to glide over long distances. Ratchet & Clank is also generous with its checkpoint system, meaning there’s never too much backtracking if you miss a jump and plummet to your death.

Ratchet & Clank is more about the action than the platforming anyway. The series is largely defined by Ratchet’s deep and eccentric arsenal of weapons, which is drawn from several games across the 13-year history of the series. Quickly selecting the right weapon at the right time without slipping up and pulling the wrong gun out of its holster can get tricky toward the end of the game because of how many options you have. 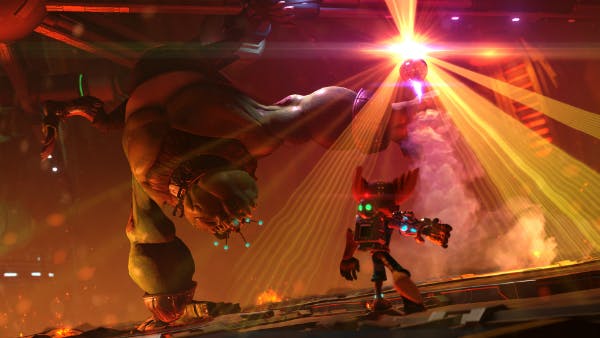 No weapon beats the Groovitron, not since it first entered Ratchet’s arsenal in 2007’s Ratchet & Clank Future: Tools of Destruction. You throw the Groovitron like a grenade, but it’s actually a disco ball that lights up the floor and forces every enemy in its activation radius to immediately boogie down no matter how much hell is breaking loose around them. Even the largest boss monsters in Ratchet & Clank have a Groovitron animation, and when you catch a bunch of enemies together, it’s like putting together a brief but instant dance party.

Another favorite of mine, Mr. Zurkon, also originally hails from Tools of Destruction. Mr. Zurkon is a combination automated turret/floating sidekick who cheerfully announces his intention to kill everything. The Glove of Doom hails back to the original 2002 game. It tosses out a handful of metal-jawed monsters that chase enemies around the level and chomp on them.

The brand new Pixelizer is like a shotgun that temporarily turns enemies into pixelated versions of themselves and makes them more vulnerable to damage. There are also plenty of traditional weapons like rocket launchers, sniper rifles, blasters, and the like, but it’s the strange guns that make Ratchet & Clank most enjoyable.

Clank is most often a guide for Ratchet, telling him which planet to visit next or which objective needs achieving. He also gets his own sections within some levels, usually when there’s a grate too small for Ratchet to fit through and something that needs to be done other side like unlocking a door or retrieving an item.

Clank’s portions of the game are usually simple puzzles designed around Clank’s ability to control and reconfigure Gadgebots, small robots that can forms temporary bridges or springboards or power generators. Ratchet & Clank also breaks up the action with simple dogfight sequences in Ratchet’s starship, a minigame for unlocking doors, and a hoverboard racing track.

Enemies sometimes drop collectible holocards, and packs of cards can also be found within the levels. Holocards are divided into themed sets of three, like a card set for each planet, a card set for characters from other Ratchet & Clank games, or card sets for individual weapons. The cards are like a museum of references to old games in the franchise for longtime fans.

Finishing a card set unlocks a more powerful version of a standard weapon for use in Challenge Mode where the game’s difficulty is markedly ramped up, or grants immediate benefits like a more powerful OmniWrench melee weapon, an increased holocard drop rate, or access to the RYNO, the series’s recurring handheld superweapon.

You can also collect Golden Bolts (as in, nuts and bolts) hidden among the levels to unlock extras like image galleries, appearance settings, and cheats, and if you want to extend the length of your first playthrough, but Challenge Mode is what’s meant to bring you back to Ratchet & Clank after finishing the story.

The more you use your weapons, the more powerful they become. You also collect Raritanium from dead enemies, or from mineral deposits, and spend the crystals on weapon upgrades. Challenge Mode allows you to retain all your weapon power levels and upgrades attained during your initial run through the game, which means creating a tremendous amount of hilarious mayhem.

Even though franchise’s last game was released in 2013, making Ratchet & Clank pretty contemporary characters instead of a pair of heroes being resurrected for a modern incarnation, there’s still an innocence about them that hails back to a time before arguments about whether or not games were art, before toxic video game culture made as many headlines as games themselves, and when games were “just fun.”

Playing the Ratchet & Clank reboot has convinced me to give the upcoming movie the benefit of the doubt. Ratchet & Clank has always had a cartoon-like sensibility both in terms of aesthetics and humor. The story behind the game is just as fun now as it was in 2002, and it’s precisely the same story being told by the movie.

This feels like a case where a video game movie can afford to pay proper deference to the source material. If the Ratchet & Clank movie’s creative team chose to do so, we might have a rare entry into the very short list of video game movies that don’t suck.