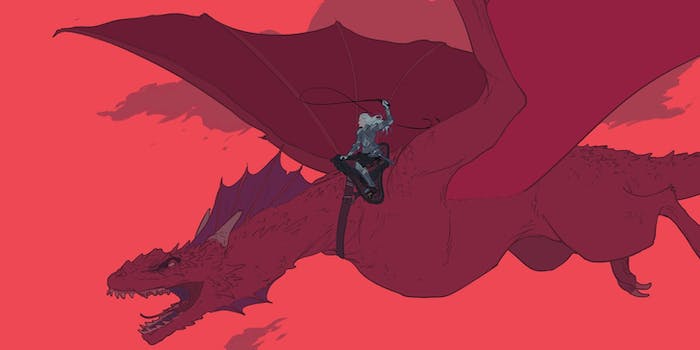 The #fanartgotmepaid hashtag is full of amazing examples of fanartists who went pro.

Professional artists are celebrating the power of fanart this week, sharing their work on the #fanartgotmepaid hashtag.

The hashtag started as a discussion about the thin line between fanart and professional, licensed work. Animation studios and comics publishers often hire illustrators based on their fanart, for obvious reasons: If you already love the source material, you’ll understand what other fans want to see. Beyond that, fanart is a great way to find an audience online, and in some cases it’s more effective than a traditional portfolio.

Yet somehow, fanart still doesn’t get the respect it deserves. Many people see it as a waste of time or somehow inferior to “original” art, and #fanartgotmepaid aims to correct that assumption. It proves there are plenty of routes to a professional art career—and many of those routes take a detour through Tumblr and DeviantArt.

The hashtag #fanartgotmepaid is full of stories about getting talent-spotted online, overlapping with the many fanartists who supplement their income with services like Patreon. Some stories are pretty direct (for instance, Jen Bartel posted this incredible image of X-Men‘s Storm two years ago, and now draws comics for Marvel and Image), while others followed a more unexpected route like Claire Hummel. She wound up getting hired to do character design for Bioshock, after someone at Irrational Games saw her historical Disney princess redesigns.

As several artists have pointed out, the hashtag isn’t meant to elevate paid art above fanart. Plenty of fanartists have no interest in going pro, and plenty of professional artists still post fanart for free. Getting hired by Marvel or Cartoon Network isn’t the end goal of posting fanart; fanart is the end goal in itself.

But at the same time, #fanartgotmepaid shares an important message for fanartists who aspire to a professional career. It reminds us that despite what some naysayers might think, many employers have a lot of respect for fanart—and maybe even started out as fanartists themselves.