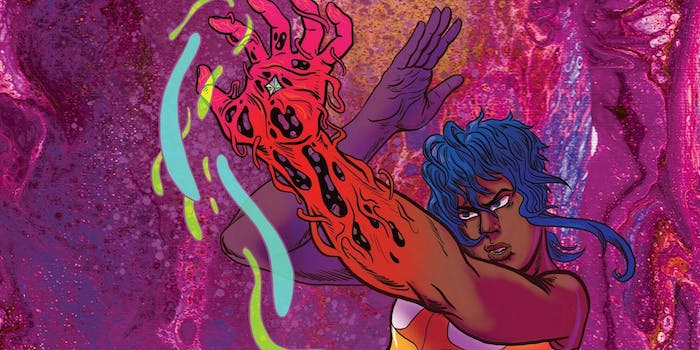 This biopunk adventure stars a human refugee trapped in an alien culture.

We featured the first issue of Prism Stalker in our list of recommended comics for 2018, and three issues in, it’s time to revisit in more depth. This comic is unlike anything else out there right now, a disturbing biopunk adventure about aliens and alienation.

Created by writer/artist Sloane Leong, Prism Stalker follows a human refugee named Vep. When we first meet her, she’s an indentured servant to an alien race, harvesting their eggs in exchange for room and board. Relocated from her homeworld, she has no other options. So while she remembers glimpses of her upbringing, her life is now shaped by a wholly inhuman culture. Her masters view humans as fundamentally inferior beings.

It takes three issues for Prism Stalker to settle into something resembling a familiar sci-fi trope. That may be off-putting to some, but it’s one of the things that attracted me in the first place. The first issue drops you straight into a deeply bizarre setting, encouraging you to immerse yourself before issue #3 introduces the main plot: Vep’s recruitment to a brutal training camp, following in the footsteps of stories like Ender’s Game. She’s one of the only humans in her class, learning a psychic martial art to help colonize a new planet.

The beauty of the unexplained

Billed by Image Comics as a crossover point for fans of Octavia Butler and Sailor Moon, Prism Stalker is pretty hard to pin down. As I noted after issue #1, it has something in common with the movie Annihilation. Its alien landscape feels really, truly alien, from the neon color palette to the total absence of human-friendly architecture. Vep and her friends sleep in organic pods. Their job involves climbing luminous vines where they dislodge eggs by singing to them. Once she enters the training facility, her daily life consists of stomach-churning body horror.

Prism Stalker revels in the kind of deep worldbuilding one usually finds in hard sci-fi novels, but in a monthly comic, there simply isn’t space to explain what’s going on. That’s a feature, not a bug. We understand the basics of Vep’s lifestyle, but we’re not meant to understand the complex alien society around her. Working non-stop, she doesn’t have time for an anthropological study. She understands as much as she needs to survive, and her masters have no interest in explaining themselves.

This makes for a refreshing kind of dystopian allegory, far more abstract than something like Bitch Planet. We’re here to witness the drudgery of capitalism, without following the typical framework of evil cyberpunk corporations. At the risk of resorting to puns, Vep’s work illustrates the Marxist idea of alienation. In the same way that a cocoa farmer might be so far along the economic food chain that they’ve never actually tasted processed chocolate, Vep’s job can’t possibly benefit her as a person. It can’t even benefit another human being. She’s a cog in a machine over which she has no control, and her refugee background is integral to that story.

Stability is a luxury outside Vep’s reach. And along with the obvious discomfort of adapting to a new culture and language, Vep’s environment takes a physical toll. These alien colonies are disturbingly… gloopy. For long-distance space travel, Vep must sink into a slimy orifice. Her new lessons involve vivid hallucinations of her limbs twisting and disintegrating. So, even her body is not her own. That makes her personal identity even more precious, and it’s clear that her employers would prefer to strip that away as well. It’s no coincidence that Vep and her classmates all seem to come from different planets. They’re being discouraged from forming a community.

That’s a lot to chew on from just the first three issues. It’s a story that invites multiple rereads between installments, accompanied by the original music they release with each issue. If you’re interested in sci-fi that really stretches the imagination, Prism Stalker is a must-read for 2018.