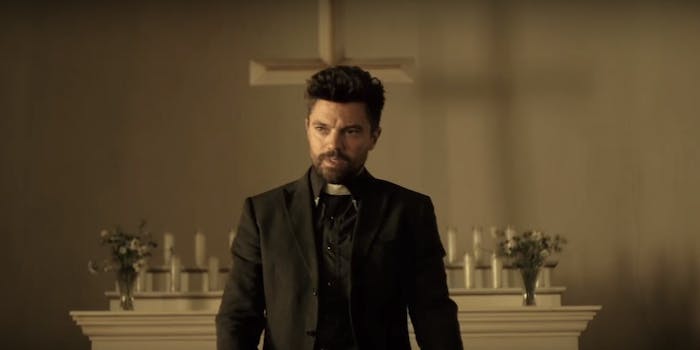 How will this comic-book western fare on television? If the cast and crew are any indication, pretty well.

After years of Hollywood dead-ends, the cult comic Preacher is finally getting a screen adaptation. And instead of being a movie (which could have easily gone wrong, given Preacher‘s long-running narrative), fans are getting a TV series from Breaking Bad producer Sam Catlin.

AMC’s Preacher series follows the grimy tone of the DC Comics/Vertigo series, a modern-day Western about a Texas preacher who gains terrifying powers after being possessed by a supernatural being known as Genesis. Accompanied by his ex-girlfriend Tulip and his vampire pal Cassidy, he goes on a quest to find God—literally.

As a supernatural drama packed with Christian imagery and gritty violence, Preacher already has a lot in common with Supernatural, DC Comics adaptions Lucifer and Constantine, and maybe even American Gods. But there’s at least one sign suggesting this show can break away from the herd: the Vertigo comic’s creative team, Steve Dillon and Garth Ennis, are onboard as co-executive producers.Screengrab via PreacherAMC/Twitter