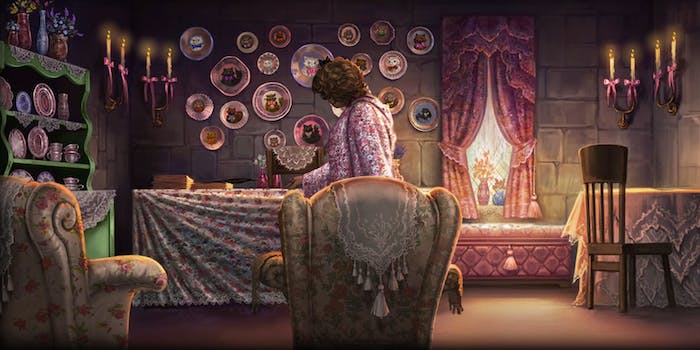 Pottermore’s Halloween treats include ‘Order of the Phoenix’, Umbridge biography

J.K. Rowling had plenty of tricks for us this Halloween.

We already knew that Pottermore was going to tell us a lot more about Dolores Jane Umbridge, one of Harry’s many Defense Against the Dark Arts professors and perhaps the most hated character in the Harry Potter series (yes, even more than Voldemort). What we didn’t know was that we were going to get the entirety of Order of the Phoenix along with it.

If you spend enough time digging around, you’ll find out a lot more about Sybill Trelawney, the position of Minister for Magic, Thestrals, Naming Seers, and Azkaban, but Umbridge’s entry is by far the most substantial. Clocking in at around 1,700 words, you’ll find it in Chapter 13 once you enter Umbridge’s office, and it’s as nauseatingly pink as you imagined. Click her for the reveal. If you don’t have a Pottermore account, you can read the entire entry courtesy of NBC’s Today.

Rowling released a number of stories through Pottermore a few years ago, but in terms of content, Umbridge’s life story is more of a straight-up biography à la Celestina Warbeck than another Rita Skeeter gossip column. It probably won’t endear you to the character, but it’s satisfying to see what made her tick—and how much she was willing to do to accomplish her goals.

Much of Umbridge’s backstory is unsurprising: she wasn’t really a pure-blood despite her claims, she climbed her way up through the Ministry’s ranks, and her many prejudices disturbed even her anti-Muggle colleagues. Rowling details an unhappy childhood during which Umbridge resented her Muggle mother, her Squib brother, and later her wizard father, who had a lowly position at the Ministry and whom she paid to stay hidden.

Fans knew that it was Umbridge’s lack of punishment after the events of Order of the Phoenix that led Harry to distrust the Ministry, but the Pottermore entry reveals that Umbridge eventually paid for her crimes. She was imprisoned for the torture, imprisonment, and death of Muggle-borns after the fall of Voldemort; as Rowling noted, not all of those innocent people made it out alive.

Rowling also revealed that Umbridge’s name was a deliberate choice and that she’s loosely based on an instructor Rowling knew and “disliked intensely on sight” mixed with an amalgam of traits from other people she knew. Until today, the only person Rowling had confirmed to be based on a real person was Gilderoy Lockhart.

“I have noticed more than once in life that a taste for the ineffably twee can go hand-in-hand with a distinctly uncharitable outlook on the world,” Rowling wrote. “I once shared an office with a woman who had covered the wall space behind her desk with pictures of fluffy kitties; she was the most bigoted, spiteful champion of the death penalty with whom it has ever been my misfortune to share a kettle.”

Given Umbridge’s sweet airs and sadistic nature, perhaps the most fitting part of her section in Pottermore is that, when you zoom in and hover over her many “Frolicsome Feline ornamental plates,” the cats start meowing.