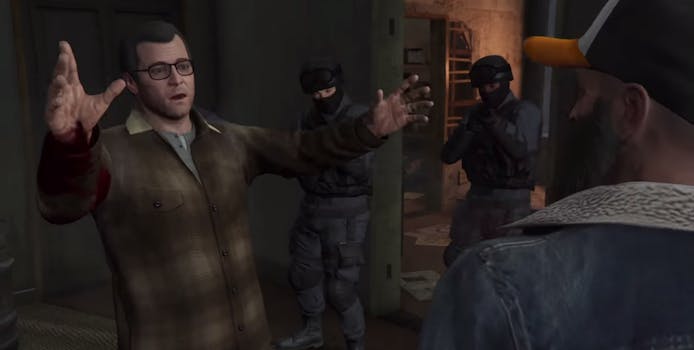 Please finish up your firefight before having a heart-to-heart.

Blasting a dozen cops before walking into a meth lab to talk business probably isn’t the smartest idea.

This Grand Theft Auto V player, in the role of Michael De Santa goes directly from fighting members of the Los Santos County Sheriff’s Department in the desert town of Sandy Shores to having a conversation with the psychotic Trevor Philips in Trevor’s meth lab. The police then attempt and fail to stop the conversation as bullets rip through the two criminals to no effect.

We’re not sure whether players are supposed to be able to trigger these cutscenes while they have a wanted level, and if that’s the glitch, but we certainly know that SWAT teams aren’t supposed to bust down the door while characters are talking like this.

Whatever glitch was responsible for that chaos, it’s fantastic. Also, note that when a pair of Federal Investigation Bureau agents walk into the room, that the SWAT team doesn’t open fire on the agents. Even in Grand Theft Auto V the cops have loyalty to their own.