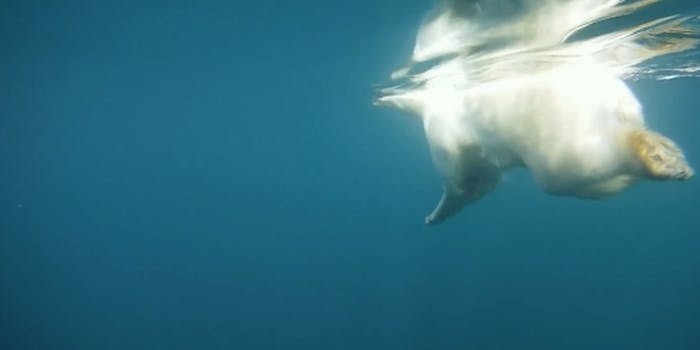 Bears having a hard time hunting seals are turning to a new food source.

The sea ice here on the western shore of Hudson Bay breaks up each summer and leaves the polar bears swimming for shore. The image of forlorn bears on small rafts of ice has become a symbol of the dangers of climate change.

And for good reason. A warming planet means less ice coverage of the Arctic Sea, leaving the bears with less time and less ice for hunting seals. They depend on seals for their survival.

But the polar bears here have discovered a new menu option. They eat snow geese.

Because the ice is melting earlier, the bears come on shore earlier, and the timing turns out to be fortunate for them. As a strange side-effect of climate change, polar bears here now often arrive in the midst of a large snow goose summer breeding ground before the geese have hatched and fledged. And with 75,000 pairs of snow geese on the Cape Churchill peninsula—the result of a continuing goose population explosion—there is an abundant new supply of food for the bears.

What’s good for the bears, however, has been devastating to the plants and the landscape, with the geese turning large swaths of tundra into barren mud. Nor does it mean that the bears are going to be OK in the long run.