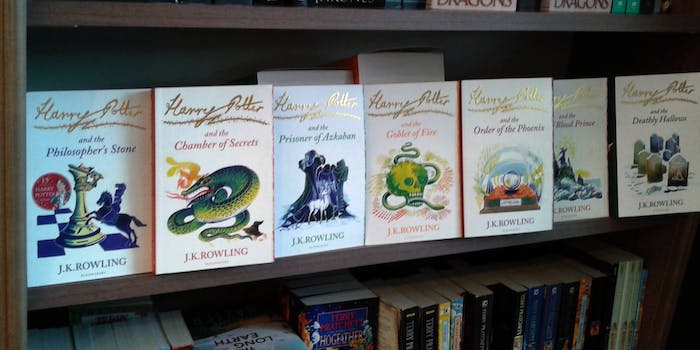 It's never a good idea to get on the bad side of 'Harry Potter' fans.

After J.K. Rowling devastatingly owned Piers Morgan on Twitter this weekend, an independent bookstore is continuing the battle.

Rowling clashed with Morgan over (what else?) politics, at which point he felt the need to say he’d never read any Harry Potter. Helpfully, the bookstore Big Green Bookshop decided to correct his mistake by tweeting the entire Harry Potter saga at him in 140-character bursts.

.@piersmorgan Mr. and Mrs. Dursley, of number four, Privet Drive, were proud to say
that they were perfectly normal, thank you very much.

The Big Green Bookshop Twitter account is run by Simon Key, who told The Independent, “I’m doing it because Piers clearly spends all day on Twitter staring at his timeline.” He explained that Morgan would hopefully find tweet-sized segments less “daunting” than reading a whole book himself.

So @Biggreenbooks is tweeting me an entire Harry Potter book because I'm a 'twat'.
This, of course, just makes him an even bigger twat.

Characteristically, Piers Morgan did not react with good humor. But when does he ever?