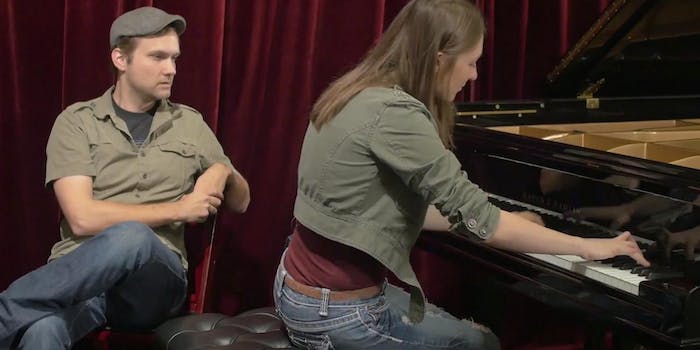 This pianist turns Nintendo themes into classical masterpieces in seconds

From DuckTales to The Legend of Zelda, this musician's take on video game themes will blow you away.

They say practice makes perfect, but for this pianist, sometimes there’s no practice necessary.

Pianist and composer Sonya Belousova makes up half of the musical group behind the YouTube channel Player Piano. Belousova creates music videos along with producer and director Tom Grey that put a classical twist on pop culture songs.

At the request of a contributor to their current Indiegogo campaign, the pair decided to create a video of Belousova trying to play classical arrangements of Nintendo video game theme songs—without any prior preparation. In what Player Piano calls an “On the Spot” video, Grey played seven Nintendo songs on a computer for Belousova, who listened to them and then in seconds created classical arrangements of the tunes on her piano.

Belousova’s skill in translating these songs to the piano so quickly is impressive to say the least. There are a lot of familiar themes she tackles like The Legend of Zelda, Super Mario Bros. 3, and Castlevania, along with some fantastic themes you may have forgotten that will instantly make you want to play your Nintendo again like Mega Man II and even DuckTales!

Check out Belousova’s skill for yourself in the video below.