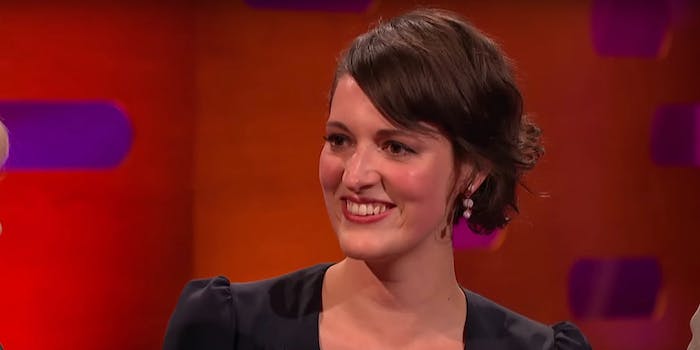 She couldn't even figure it out after googling it.

The word is out about British actress Phoebe Waller-Bridge and the rebellious new droid she plays in Solo, the newest Star Wars spinoff that hits theaters on May 25. But she just hilariously admitted she didn’t actually know what a droid was when she auditioned.

Waller-Bridge and other actors from the Solo movie visited The Graham Norton Show on Friday, and Norton wasted no time exposing that Waller-Bridge had never seen a Star Wars film before she auditioned to play L3-37.

“Thanks for bringing this up,” Waller-Bridge said before she launched into the story of how she auditioned for the role thinking she would play a human.

“I was going to the audition and I thought, ‘This character is amazing, she’s a revolutionary and cool and the dialogue is amazing,’” she said. “But it said in one of the stage directions, ‘droid.’”

Waller-Bridge said she Googled the term and (auspiciously) didn’t find anything helpful. She even asked her taxi driver on the way to the audition and he reportedly didn’t know either. Which, quite frankly, seems a little hard to believe.

So she played it safe and performed the role as a human, but then the casting directors asked her to be more “droid-like.” Thankfully, one of them acted it out a little and she figured out that a droid is a robot.

Waller-Bridge landed the role despite all of that and now gets to perform alongside Donald Glover—who plays Lando Calrissian—as his partner and co-pilot. L3-37 will also reportedly be an advocate for equal rights for droids.

“She has a social conscience, which is really great to play,” Waller-Bridge said. “There’s a fire in her belly and something she cares about.”

Clearly, Waller-Bridge is passionate enough about her character that hardcore Star Wars fans should be able to forgive her for her ignorance about the Star Wars series.