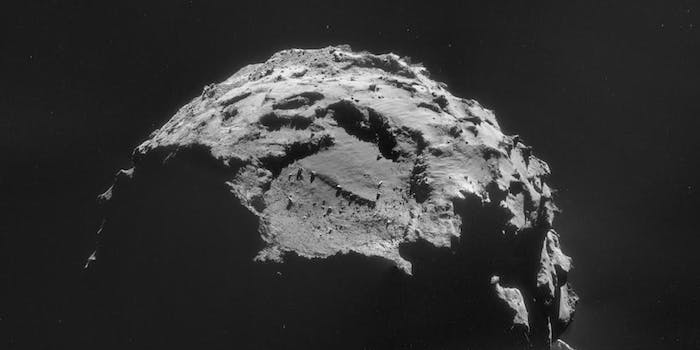 Philae the robot lander has made history by landing on a moving comet, but it may only have a few more hours left to “live.”

The European Space Agency’s Rosetta mission began with a decade-long journey to Comet 67P, which is currently orbiting between Mars and Jupiter. The Philae landing robot detached from Rosetta on Wednesday, but unfortunately its arrival did not go as planned. Although Philae has successfully sent back a lot of useful information about the comet, it is rapidly running out of power.

The lander’s harpoons failed to fire when it first landed on the comet, causing it to bounce several times before landing in an unplanned location. With Philae now hidden under a rocky overhang, it only receives a fraction of the sunlight required to recharge using its solar panels. Unless the ESA takes a risk and tries to move it to another location, the lander will shut down on Saturday. But until then, the little probe’s Twitter feed will continue to provide updates for the many people who have been watching its progress back home on Earth.

Back to work! I’m now drilling into the surface of #67P… I’ll give you updates as soon as I can! #CometLanding

Great news Philae! MT @Philae2014: Last night MUPUS & APXS got to work! My team is currently checking how they did #CometLanding

The ESA’s Twitter feeds for Philae and the orbiting Rosetta probe have been a huge success. Written in first person, they make the two robotic spacecraft feel almost human. In a similar vein, the webcomic XKCD provided live coverage of the comet landing, characterizing Philae as a brave and optimistic little explorer. “I landed!” Philae says in the final panel. “I’m on a comet. I’m OK and I’m on a comet.” It’s understandable that if Philae runs out of battery this weekend, many of us will view it as an emotional loss rather than just a technical mishap.

Organizations like NASA and the ESA can have some difficulty drumming up public interest and funding, but social media has proven to be a major boon. Astronauts including Chris Hadfield have gained huge social media followings by posting updates from space, as have a handful of non-human explorers traveling through our solar system.

Anthropomorphized social media feeds are a great way to connect people with robotic space probes, as proved by the emotional response to NASA’s Mars rovers and China’s lunar rover, Yuta. Much like the Twitter account for Philae, NASA’s Curiosity rover tweets in first person, humanizing its Mars mission for its 1.7 million followers.

Yutu the lunar rover, known in English as Jade Rabbit, had a popular unofficial Weibo account. When it faced a technical fault during its mission in January, Chinese authorities released a report from the perspective of Jade Rabbit itself.

“Although I should’ve gone to bed this morning, my masters discovered something abnormal with my mechanical control system,” they wrote. “My masters are staying up all night working for a solution. I heard their eyes are looking more like my red rabbit eyes.” Later, Patrick Stewart appeared on the Daily Show in a skit where he performed the “final words” of the Jade Rabbit rover.

Philae has now drilled into the comet’s surface to collect samples, but it’s unlikely to survive the weekend. Its controllers back at ESA Operations in Darmstadt, Germany, may attempt to catch more sunlight by rotating its solar panels, but this would only gain a few more hours of energy.

Otherwise, they’re faced with a choice between moving the lander and risking it getting lost or damaged, or leaving it to run out of battery. This would lead to an indefinite hibernation, with only a small chance of Philae “waking up” if it one day found itself getting more direct sunlight.

For the moment, signs point to Philae sending its final message sometime on Friday night.