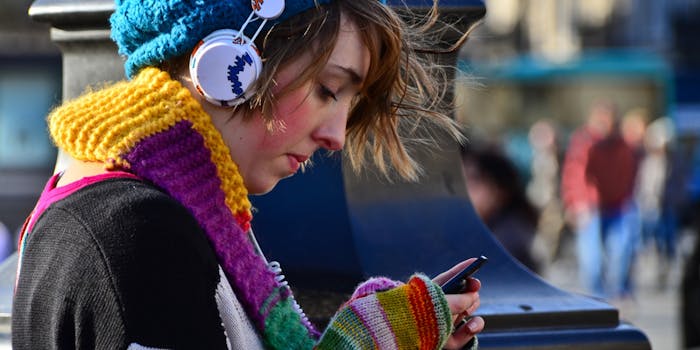 The feel the need to be silent in the gaming community.

We’ve known for a while that the number of women and teen girls who play video games has been rising fast.

Last year, studies showed that adult women had taken over as the largest single demographic in gaming. Still, many men rejected that data on the basis that those women were playing the ‘wrong’ games—mobile games and those outside the core shooters and RPGs—or that the data was just false.

Now, a new Pew survey with additional digging by Kotaku has shown that 60 percent of all teen girls play games—and a wide variety of games, online, socially, and by themselves.

Why don’t we know more about them? Well, it’s at least in part because only 9 percent of those teen girl gamers ever turn their microphones on while playing on the Internet.

Here’s how the data breaks down:

Because of the many hours they spend gaming online, boys are also more likely to learn socialization skills through gaming, to bond with other boys through gaming, and to see gaming as a core community.

But Kotaku asked the research team to draw an even more detailed picture of what those 59 percent of teen girls were doing while they gamed—specifically, how many of them used voice chat. The reason this matters is that online gaming environments are notorious for being toxic to women and girls who turn on their mics. When they do, they are frequently subject to a much greater level of harassment and gender-based taunting than their male peers.

In response, study co-lead Amanda Lenhart produced a new statistic: Only 9 percent of girl gamers ever turn their microphones on.

Such a statistic highlights the fact that women and girls experience the Internet very differently than men and boys do. For teenage boys, turning on the mic while gaming is a normal part of a positive daily social routine. For teenage girls, even going online to game with strangers can be a daunting proposition—and turning on the mic almost always out of the question.

The comments in response to the Kotaku piece revealed some of this fear.

I have to be the “property” so-to-speak of another male presence in the chat for people to treat me like an actual person rather than a source of mockery or sex. It’s pathetic and annoying, and just not worth using a mic unless I have to because I need to coordinate with the rest of the team.

Most guys think the problem we have is the verbal harassment/”trash talk,” like “get back in the kitchen” or whatever. But for me personally, it’s actually more the “positive” attention, because it tends to be creepy and weird. Random friend requests, stalking behavior, and so on.

“Yer so awesome GamerGirl, you’re the awesomest and the prettiest! <3 <3 <3.”
“Yeah, er, I need you to treat me like everyone else on your team, that is, like a generic looking army dude holding an assault rifle who’s about to capture the objective but you keep distracting me…”“OH MY GOD YOU ARE SUCH A BITCH, I WAS JUST TRYING TO BE NICE TO YOU! WHAT A CUNT!”

While that last sentiment is one familiar to women across the Internet, whether they’re gaming or just going about their routine lives, the intensity of these experiences in the gaming community speaks to the ongoing tensions that seemed to reach a head with last year’s Gamergate.

The fact that women are reluctant to turn on their mics speaks to the need to change the way men and women interact in gaming environments.