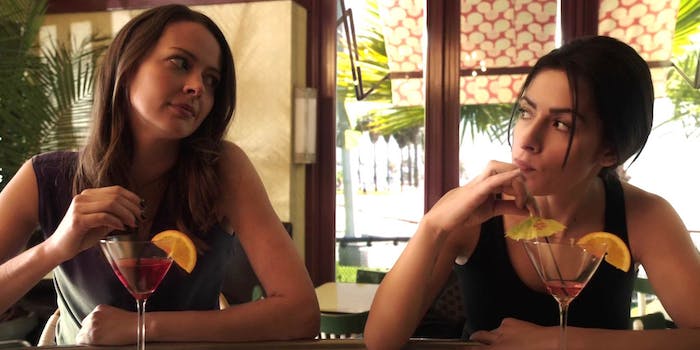 Shaw is back in action, and actress Sarah Shahi seems confident about her relationship with Root!

Person of Interest‘s fifth season may be its last, so the cast and crew are making the most of it. At New York Comic Con this weekend, they shared some new details on how season 5 will pan out—including the much-discussed relationship between Root and Shaw.

Season 4 ended on two huge cliffhangers, with Finch compressing the Machine into a drive the size of a briefcase, and Shaw (who was previously presumed dead) being held captive by their enemies.

The NYCC panel aired a teaser clip showing how the Machine is handling its newly compressed memory. Instead of being the godlike artificial intelligence it was at the end of season four, its facial recognition system is on the fritz, giving the main cast a unique chance to do impressions of each other’s characters. (Michael Emerson is definitely the best.)

As for Shaw, many fans were worried that she might not return because actress Sarah Shahi went on maternity leave earlier this year. This worry was exacerbated by the fact that Shaw and Root kissed moments before Shaw was (supposedly) shot to death. Was it possible that Person of Interest had finally confirmed a popular same-sex pairing, only to chicken out by killing off one of the characters?

Judging by Sarah Shahi’s comments during the NYCC panel, fans shouldn’t be too worried. While she didn’t share any specific spoilers, her comments were fairly reassuring: “I think the audience is going to be happy with what they see, I think they deserve to see what’s coming up.”

Shahi also spoke about her work on The L Word, during which she received many letters from fans whose lives were changed by the show’s depiction of queer women. So while she and Amy Acker were surprised by Root and Shaw’s romantic storyline, Shahi is well aware of the importance of LGBT representation on TV.

“It’s incredibly important for [LGBT viewers] to have role models,” she said. “To have someone on TV they can empathize and emulate and find strength in.”

Along with the Root/Shaw issue and Finch’s problems with the recently hamstrung Machine, showrunner Greg Plageman emphasized the show’s cultural relevance as a story about artificial intelligence and government surveillance. He also aimed a sly dig at copycat shows—Mr. Robot, possibly?—saying, “I think it’s a real testament to our show that I look at the fall schedule of broadcast television and I see about three shows that are ripping us off.”

Photo via Person of Interest/CBS