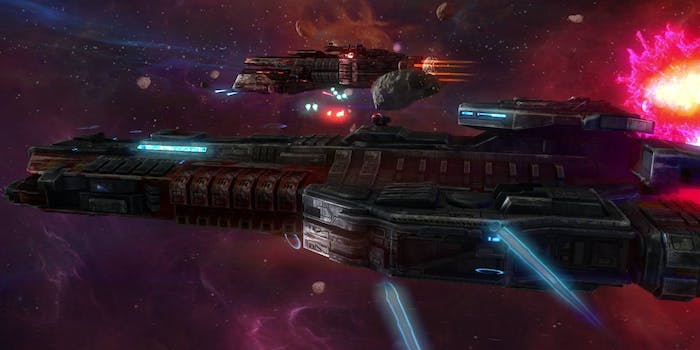 A two-guy crew built one of the most interesting games on display at PAX South.

When we checked out Rebel Galaxy at PAX South in San Antonio, we were taken aback. Not just by the high quality art and visuals, but by the fact it was all done by two guys and a few contractors.

When you look at the resumes of Travis Baldree and Erich Schaefer, it becomes quickly apparent why Rebel Galaxy looks so solid. Both men helped start Runic Games, the developer behind the popular multiplayer Torchlight series. Schaefer was also one of the creators behind Diablo, which is, you know, kind of a big deal.

The game has a very Cowboy Bebop or Firefly feel to it. You’re a man who inherited a ship from his deceased aunt and is on the hunt to figure out what happened to her. In the process, you can run missions, earn money, buy new ships, and gain allies.

Exploration feels much like something out of The Legend of Zelda: The Wind Waker—another game where you’re traveling the world by ship. This is because your ship only traverses on one plane. You cannot move on the z-axis. It may seem odd to not be able to  move in all directions in a game that takes place in space, but it does make travel simpler.

Even with the limited mobility, there’s plenty to look at. The vastness of your galaxy will be filled with asteroid belts, debris, and other natural phenomenons.

Combat is akin to something out of Assassin’s Creed IV: Black Flag. Not the assassination part, but the naval combat part. You amass a giant spaceship, with giant guns, against other giant spaceships, with giant guns. The game focuses heavily on broadside combat. That means positioning the side of your ship toward the enemy and blasting them with a ton of firepower.

Combat seems easy enough to pick-up and play. When smaller crafts are zipping around, your machine guns can lock on and take them out, dampening their potential annoyance.

You won’t be doing any first-person shooting, but you will be interacting heavily with other characters, running side missions, and earning money to upgrade your stuff. It’s a formula that works, but with the risk of being too formulaic. We’ll see if Double Damage can pull it off when the game comes out later this year.