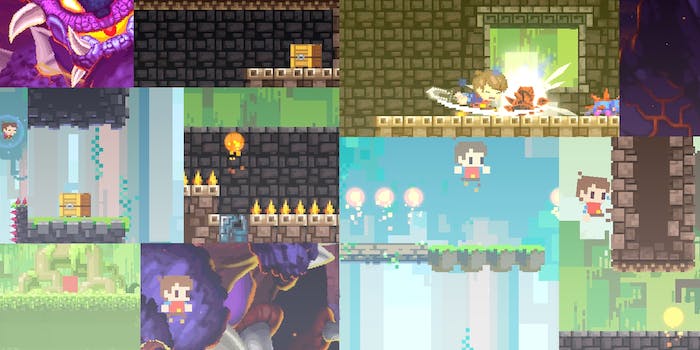 Adventures of Pip gets better graphics as you progress

Life starts as a pixel, and you can gain bits from there.

There were tons of flashy lights and anime-T-shirt-wearing salesmen vying for attention during the recent PAX South gaming convention in San Antonio. There was one game, however, that made us want to sit down and play.

Adventures of Pip comes to us from TicToc Games, which Kickstarted the project last year. There are tons of games out there that transform you into more bad-ass versions of your character as you progress. Very seldom do those transformations upgrade your art style.

Pip lives in a land that sadly has a strong caste system. Those born in the aristocracy are adorned with 32-bit aesthetic and look down on less privileged 16- and 8-bit subjects. Pip, however, isn’t even graced with 8-bits. Sadly, he’s only a pixel.

But Pip is determined to break the mold as he works to transform himself into 8-, 16-, or 32-bit. With each transformation Pip gains new abilities.

The charming premise aside, Adventures of Pip is shaping up to be a solid puzzle platformer. Not only is it visually pleasing, the gameplay performed well at PAX South. The platforming felt great, and upgrading between powers brought on a lot of possibilities.

The variety of puzzles we tried were light, but the TicToc Games team assured us that the game would really ramp up the difficulty later on. They let us know that for completionists, or those who want a better challenge, there will be branching pathways with harder puzzles.

The mishmash of art was something unlike anything we’ve seen. The team said that the art style of the entire game would evolve, and toward the end, the levels would look like paintings.

Adventures of Pip is slated to come out this May.