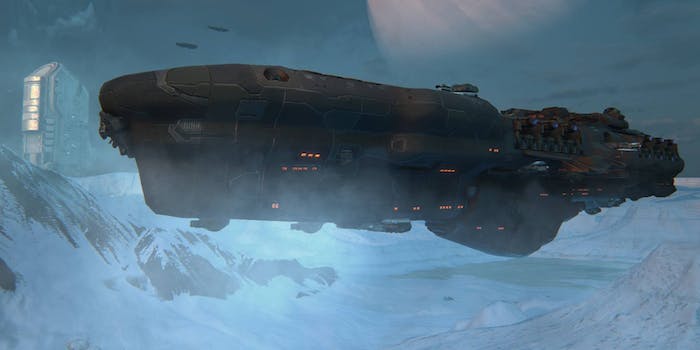 This is no ordinary dogfight.

At its debut event in San Antonio, there was one line at the PAX South gaming convention that would not whither. It was for a slow and methodical spaceship combat game. An outlier to say the least.

Dreadnought, being made by studio Yager, brings something rather different to the free-to-play arena. It doesn’t deal with cards, tower defense, or massive online battle arenas. It’s just spaceships.

Not the quick and zippy X-Wings from Star Wars, but massive spaceships. Ships that are 400-meters long and have giant firepower.

Dreadnought’s concept is rather simple. Games are separated into two teams. The first team to get to 20 kills wins. Unlike Call of Duty in which one player can carry the rest of the team, Dreadnought requires players to work together. Since you’re a fleet of ships trying to battle another fleet, flying into the middle of combat will get you destroyed. Teams must work to corner other ships and take them down. There’s definitely a lot of room for strategy, and coordinated teams will come out victorious.

Remember, these ships are huge, so turning isn’t very fast or easy. Everything is very deliberate. Even the lightest ship takes a couple of seconds to turn 90 degrees. It’s necessary to have a plan of attack before you waste precious time turning in circles trying to find the next ship to take down.

From what we played, the production value looked good. Ships were detailed, and there weren’t any hiccups or slowdowns. At least the version being showed off at PAX South felt like a full retail game.

Free-to-play usually worries gamers, but according to Technical Director Eckhard Duken, it does not mean pay to win. Micro transactions will not affect gameplay, he said, so it’s possible for a new player with enough skill to take down someone more seasoned.

Dreadnought feels fresh and is unlike anything we’ve played before, especially in the multiplayer arena. Since it’s free to play, it will be interesting to see how the community develops. Time will tell how many actually jump on board and take the leap into space.