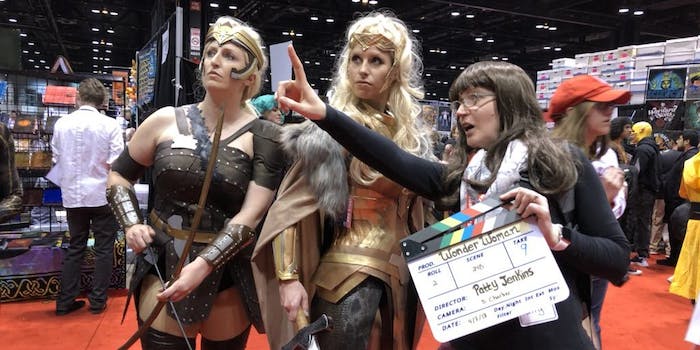 This is such a neat idea.

The great thing about big conventions like C2E2 is the wide range of cosplay. No character is too obscure, and you wind up seeing some seriously imaginative costume ideas. Like, for example, this person who dressed up as Wonder Woman director Patty Jenkins.

On her own, Fake Patty Jenkins basically looks like a random woman holding a clapper board. But when she stands next to a Wonder Woman cosplayer, she’s immediately recognizable. (You know, in case you missed the big “Patty Jenkins” name tag.) Cosplayer Jessi Chartier replicated Jenkins’ distinctive mane of dark hair to complete the costume, and she shot some awesome photos from the convention floor.

The costume earned an enthusiastic endorsement from Jenkins herself, as you might expect.

Okay, this is completely hysterical and insane. My entire WW crew and I just laughed SO hard at this. Nice @JessiChartier. What a compliment!!! Thank you. https://t.co/aTDp3Jn6Kb

Given that the only director cosplays we’ve seen before are super-recognizable figures like George Lucas, this really proves how famous Patty Jenkins has become in the past year. Can we expect a Taika Waititi cosplay sometime in the near future?