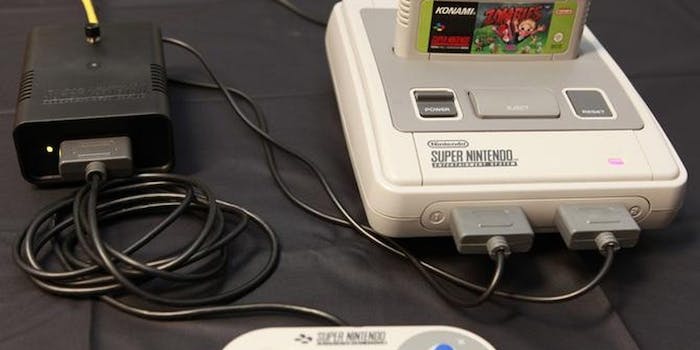 Play your Super Nintendo online, thanks to this open source hardware

With XBAND long dead, an open source solution could bring online multiplayer back into the hands of retro gamers.

When we all expect that any modern mulitplayer game has an online element to it, it can come as a bit of a shock to fire up Super Mario Kart and realize that, unless you’ve got a multitap squirreled away, you only get to race one other person. Oh, and they have to be in your living room. If only we could play our old SNES games online.

Some dedicated retro gamers are making that happen. Following a discussion about developing online hardware for Super Nintendo on a German message board, Michael Fitzmayer developed SNESoIP, which he describes as a “network-bridge for sharing local controller-inputs over the Internet.” The project is open source and listed on GitHub, which includes all the components you need to build your own.

In a chat, Fitzmayer said the project took him about four weeks to get to the current proof-of-concept stage, and that he did it all in his spare time.

“I read a few articles about the possibility of playing SNES games online on the message board, and then I was just curious,” he said. “Especially since something similar was done before, back in the mid 90s. It was called XBAND by Catapult Entertainment.”

Sega’s Dreamcast was the first console with native online multiplayer, but the XBAND add-on for SNES and Sega Genesis brought multiplayer to consoles beforehand. The service was subscription based, with unlimited connections to the XBAND server costing $9.95 a month, with extra fees added for dialing out of a local service area. (Remember those?)

With XBAND long dead, an open source solution could bring online multiplayer back into the hands of retro gamers. As you can see in the demo videos, SNESoIP essentially shares controller inputs to each console, and there is a bit of lag. But it does work, and Fitzmayer said the tech could theoretically be applied to any two player game.

Read the full story on Motherboard. Photo of the SNESoIP system via Fitzmayer’s blog