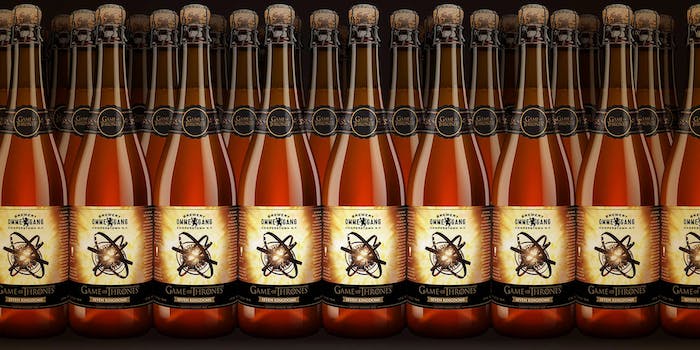 The great Houses of Westeros are linked and intertwined in political marriage, but the next great matchup appearing in the Seven Kingdoms is one of good taste.

Brewery Ommegang, a craft brewery in upstate New York that specializes in Belgian-style beers, has collaborated with HBO on its Game of Thrones beers since 2013. Ommegang has invoked classic beer beats with Iron Throne Blonde Ale and Take the Black Stout and concocted more ambitious brews such as Three-Eyed Raven, Fire and Blood, and Valar Morghulis—which pair excellently with a feast fit for a queen. Their latest brew is a yet another delicious marriage between two ruling beer families.

Seven Kingdoms Hoppy Wheat Ale, like the name suggests, is a combination of a Belgian wheat and a hoppy American ale. The beer is a pale yellow color that comes off looking friendly to those who are leery of anything heavier than the lightest of ales. The taste, however, will sneak up and hook you in when you least expect it. 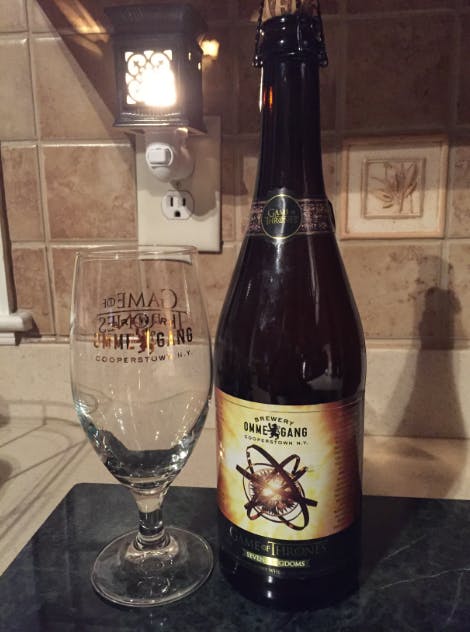 Ommegang beers often tie into the series themselves, and Seven Kingdoms is no different. According to a note from HBO and Ommegang, the brew’s subtleties and complex nature are meant to mirror “the many intersecting storylines and characters on the show,” and the bottle itself calls to what eventually united the Seven Kingdoms of Westeros. It wasn’t war. It was the union of the Targaryens and Martells in a political marriage.

The mix of hoppy and wheat ale, along with citrus flavors like tart orange and lemon, offer a more nuanced hoppy beer, and for someone who is usually not a fan of excess hops, it’s a tasteful introduction to what the style can offer. I tried Seven Kingdoms over the course of two nights, and I enjoyed it much more the second night—after it was able to sit chilled in a refrigerator for more time.

At 6.9 percent alcohol, this is no beer meant for the sort of drinking game fans might play for a new episode. The hops are present at first, but they become less noticeable the longer you sip the beer. Ommegang suggests pairing Seven Kingdoms with fish dishes and light cheeses, although you can easily sip it on its own.

We’re about to head into the unknown on Sunday night as Game of Thrones goes off-book, and Seven Kingdoms, which sells in 750mL bottles and is currently available in stores, makes for a fitting companion on that journey.