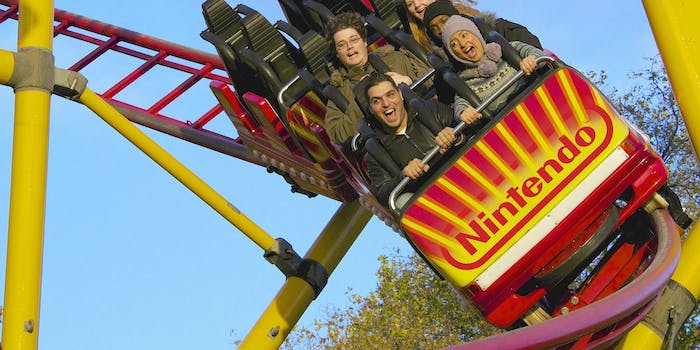 Nintendo-themed rides are coming to Universal Parks and Resorts

Nintendo continues to find new ways to leverage its cast of beloved characters.

Mario and Luigi will be joining Spider-Man, Harry Potter, and Optimus Prime at Universal Theme Parks.

The deal announced today between Nintendo and Universal Parks and Resorts paves the way for Nintendo-themed rides at Universal’s theme parks in Los Angeles, Orlando, Osaka, and Singapore. This marks yet another sign that a series of rocky years for one of the most venerable companies in the video game industry could be coming to an end.

Critics and consumers weren’t sure what to make of the Wii U when Nintendo revealed the console in 2011. It was part tablet, part HD console, some people thought it was an add-on to Nintendo’s extremely successful Wii console, and this confusion may have had everything to do with the console’s poor performance in the marketplace.

Nintendo continued to dominate in the handheld gaming market with its DS line of products, but in 2012 reported its first-ever annual loss, followed by similar results in its 2013 and 2014 financial reports.

Nintendo’s 2015 financial report, however, confirmed a return to profitability. Its successful line of Amiibo figurines, which add functionality to certain Nintendo games on Wii U and New Nintendo 3DS handhelds, played a significant role in this turnaround.

The Amiibo initiative has been so successful that Nintendo has been unable to keep up with consumer demand, prompting an apology to fans on Monday and a promise to do better, including the eventual reissue of Amiibo that rapidly sold out in the consumer frenzy over the figurines.

Investor for years clamored for Nintendo to jump into the wildly successful mobile gaming market while Nintendo president Satoru Iwata resisted. On March 17, however, Nintendo announced a deal with DeNA, a pillar of the Japanese mobile game industry, in which Nintendo bought a 10-percent share in the company and would open its entire slate of intellectual properties to mobile game development. The value of Nintendo shares in the wake of this announcement shot up by 21 percent.

Nintendo also announced, during the same investor call, that it was developing a new console codenamed NX. Iwata stated that Nintendo hoped to share details about the new NX system, sometime in 2016.

Today’s announcement about the deal between Nintendo and Universal Parks and Resorts therefore becomes yet another bullet point on the list of indications that Nintendo has bounced back from its three-year-lull.