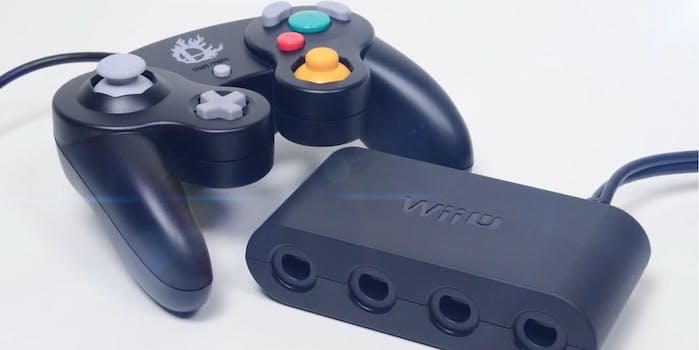 But will the new Smash Bros. be any good?

Nintendo is readying a full frontal assault against my wallet, and it looks like their strategy will work beautifully.

Nintendo announced Thursday that it plans to release an officially licenced peripheral that will allow players to connect their Gamecube controllers to a WiiU. What this means is that players will be able to play the new Super Smash Bros. with probably the most universally accepted controller method.

Get excited! The #WiiU version of #SmashBros. will be playable with GameCube controllers. pic.twitter.com/nmyj9QMsuU

Also shown in the image above is the classic Gamecube controller with the Smash Bros. logo in the middle. Could Nintendo also be teasing a re-release of the 13 year-old peripheral? We do know that third-party peripheral maker PDP will be developing a Gamecube style controller for the release of Smash Bros., which is expected later this year. But considering how fickle competitive gamers can be, it’s still to be seen if the community will embrace a non-Nintendo branded controller.

Professional Smash players are also rather particular on things like input lag, also known as latency. It’s the time it takes for a button press to react on screen. For this reason, competitive Smash players still choose to play on old CRT televisions with wired controllers. The new Gamecube controller adapter does solve one of these issues. Being completely wired, it minimizes all chances of input lag between controller and console.

The Gamecube controller is an incredible feat of engineering, hosting a well-designed octogonal thumbstick, unique button layout, and a comfortable ergonomic feel.

Nintendo, as a company, usually caters its games to its own developed hardware. Clearly, when Super Smash Bros. Melee was being developed, it was catering its control style to fully utilize the ergonomic advantages the Gamecube controller had to offer.

In other words, the Gamecube controller and Smash Bros. are essentially synonymous.

Although all of this looks promising, it’s still to be seen if the new Smash Bros. game itself can hold its own against a very hardcore and critical fanbase. Many were turned off the by the slow and defense heavy Super Smash Bros. Brawl. Even now, fighting game tournaments continue to host competitions featuring the much older Melee over Brawl. We will see later this year if the new Smash can win the hardcore back.

You can check out the full reveal video below along with the roster of professional Smash Bros. players that will be competing in an exhibition tournament next month during E3.