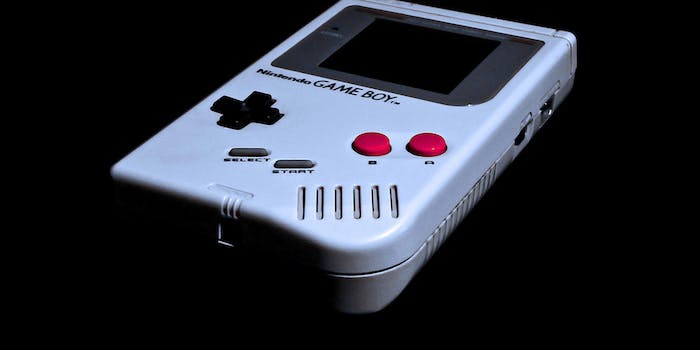 The 25 coolest things that ever happened to the Game Boy

Today we mark a very special silver anniversary: that of Nintendo's Game Boy.

Today we mark a very special silver anniversary: that of Nintendo’s Game Boy.

Released on April 21, 1989, the Game Boy ushered in a brand new era of gaming. No longer would we have to wait until we got home to indulge in the adventures of Mario, Luigi, and friends. Now, we were playing with “portable power!” Suddenly, everything from long car rides to boring birthday parties became a lot more bearable—assuming our four overworked AA batteries lasted.

While it wasn’t the first incarnation of a mobile game system with interchangeable cartridges (that honor belonged to Milton-Bradley’s “Microvision,” released a full decade earlier in 1979), it was definitely the most popular. Competitors copied (and improved upon) their own versions of the Game Boy and the system as a whole served as a general predecessor to such devices as Nintendo DS and, of course, game-ready smartphones.

So pop in a cartridge, wait for the title to lower into the center of your screen and “beep,” and come on a journey that recounts 25 memorable moments in Game Boy’s history. And you can do it no matter where you are. 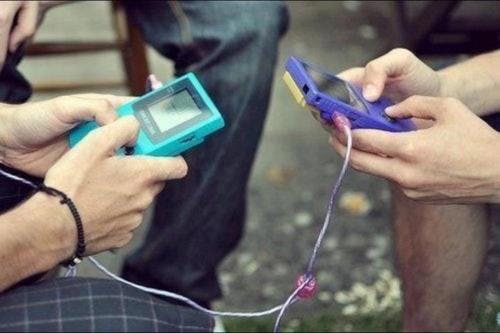 Words With Friends and other such Smartphone games continue the time-honored tradition of playing games with your friends—a tradition that was started with the Game Link. The Game Link was truly an amazing accessory, in that it allowed you to sync your system together with a friend (provided you were both present and standing about one foot away from each other). Titles like Tetris and Pokemon took advantage of this cable, introducing the infamous “2P” to a system that had historically been one of solitude. 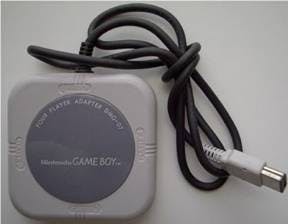 But why limit Game Boy playing to you and just one other friend? With the Game Boy Four-Player Adapter, you and three other friends could all sync up together! Utilized by titles like Yoshi’s Cookie and F-1 Race, the adapter was a mobile version of the original NES console’s “Satellite” accessory. 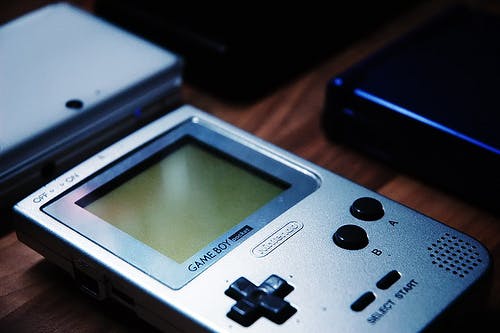 While the “portable power” of the Game Boy was indeed revolutionary, it still didn’t hide the fact that the first Game Boy design had it just a tad smaller than a brick. In the system’s first-ever revision, Nintendo introduced Game Boy pocket, which could play all of the games of its predecessor but with a much slimmer design. 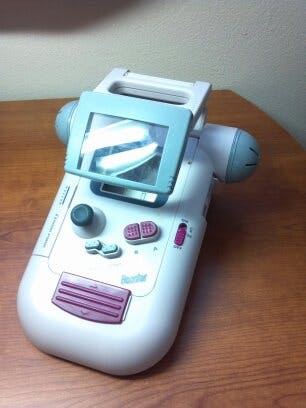 This little-known accessory was an ill-fated attempt to add all sorts of power to your Game Boy, from joystick controls to an enhanced audio/visual scheme. What wound up happening was that it turned a simple little device into something you might find on the Starship Enterprise. It’d be easier to just hook your regular NES up to a TV set. At least that would look less ridiculous. 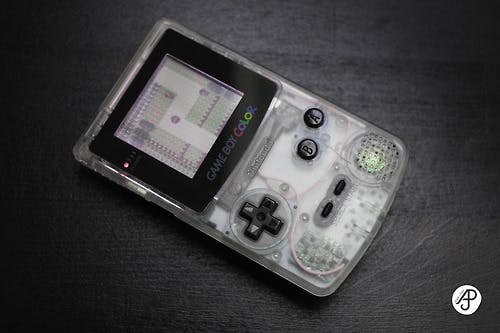 While Game Boy was revolutionary for its portable design, it certainly wasn’t winning any awards for graphics or color. In fact, I distinctly remember a commercial for Sega Game Gear describing Game Boy’s palette as “creamed spinach color.”

Thus, Nintendo’s first answer to full-color handheld systems like Sega Game Gear and the Atari Lynx was the Game Boy Color. Released in 1998, it featured the same slim design of the Game Boy Pocket and, for the first time in portable Nintendo history, a color screen. 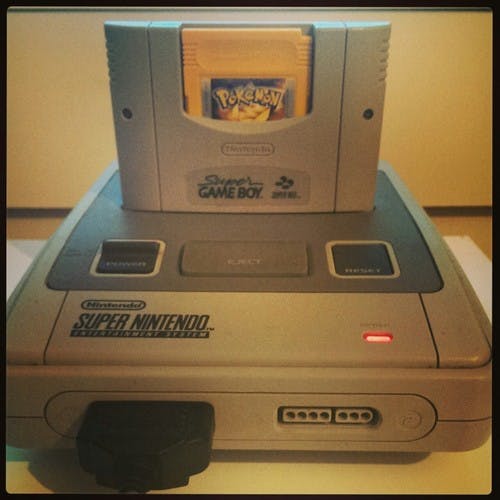 The Super NES may not have been able to play regular Nintendo cartridges, but with the unique Super Game Boy adapter, it could play your Game Boy titles. Now, all of the titles that you formerly enjoyed while out and about can be played on your big TV screen that chains you to your home console setup! After all, what would Tetris be without huge, colorful graphics?

Game Boy was not only a worldwide phenomenon, but also an out-of-this-world phenomenon. In 1993, cosmonaut Aleksandr A. Serebrov made video game headlines when he took a Game Boy on a trip up to the Mir Space Station. This ushered in an entirely new level of disconnect: here, you have the galaxies literally whizzing by you–and still your prime concern is trying to make an L-block fit perfectly in Tetris. 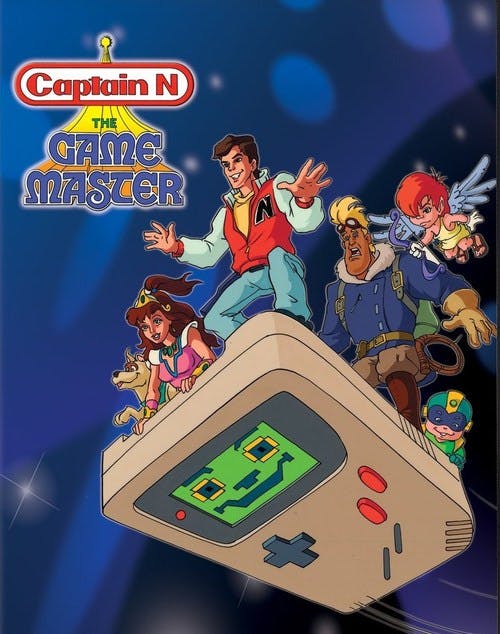 8) Game Boy as a character

It’s no secret that many early attempts at converting video games to cartoons didn’t work out so well. In The Adventures of Captain N, a 1980s series that always preceded the Super Mario Bros. Super Show, the Game Boy was an actual character, joining forces with other Nintendo staples like Mega Man, Kid Icarus, and Simon Belmont. Yes, he could walk (or, rather, bounce) and everything. He was even outfitted with a face, something a real Game Boy rarely sported, that looked more at home on the Kool-Aid Man. 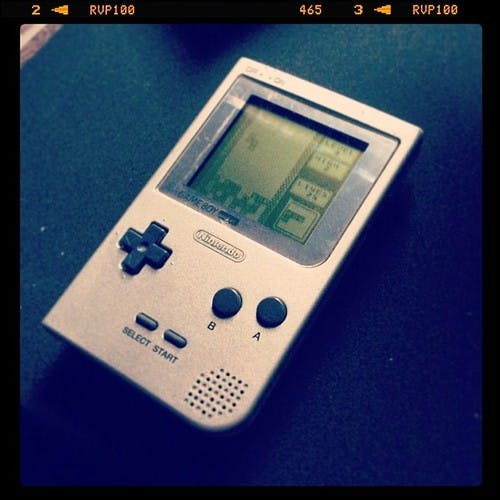 Many of the early Game Boy consoles were sold with Tetris as your “starter” game. As a result, it became one of the device’s most popular games, with gamers everywhere attempting to clear those blocks.

Obviously, you can’t have a Nintendo system—not even the Virtual Boy—without a Super Mario title. Mario, Luigi, and friends brought their adventures to the small screen in Super Mario Land, which featured not only a large desert environment, but also a nifty underwater ship for water stages.

The sequel to Super Mario Land is a pinnacle in the Super Mario storyline, as it marks the first-ever appearance of Wario.

Hardcore gamers will insist that Pokémon Red/Blue is the best title ever released for any incarnation of the Game Boy. It was a perfect fit for the compact screen and took major advantage of linking capabilities to share captured Pokémon with your friends. 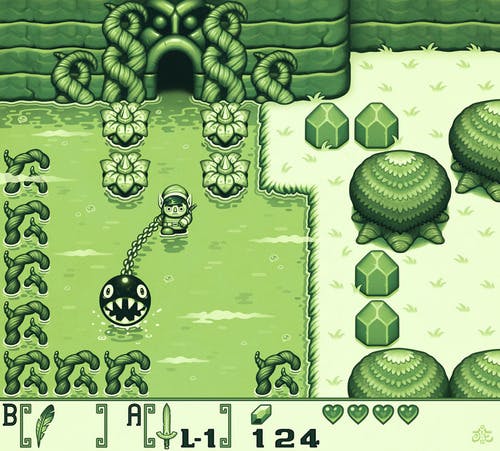 13) The Legend of Zelda: Link’s Awakening

Like Mario, it wasn’t long before Nintendo ported Link off to its portable counterpart. The Legend of Zelda: Link’s Awakening was a hit with gamers, despite the fact that it didn’t possess standard LoZ features like the Triforces or, well, Zelda herself. 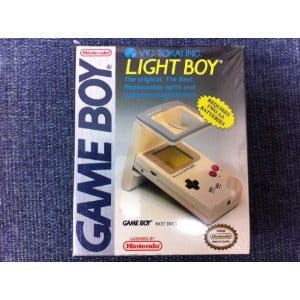 Obviously, the original Game Boy’s display was nothing to brag about. At times, the screen provided no more illumination than a wristwatch. Nintendo patched this up with the Game Boy light, which provided a nice backlight effect to whatever you were playing (and also allowed you to continue gameplay well after your parents told you to go to sleep). These days, portable game system screens are bright enough on their own (also, kids don’t listen to their parents’ demands). 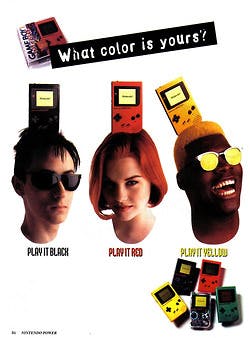 In place of stickers, Game Boy redesigned its signature portable system in 1995 with the “Play it Loud” series. This series introduced a wide array of colors (and one see-through model) to the Game Boy consoles—to everything but the screen itself. This hardly mattered to juvenile gamers, however, who could now pilot around Mario, Link, Tetris blocks, etc. while seeing the device’s interior circuitry! 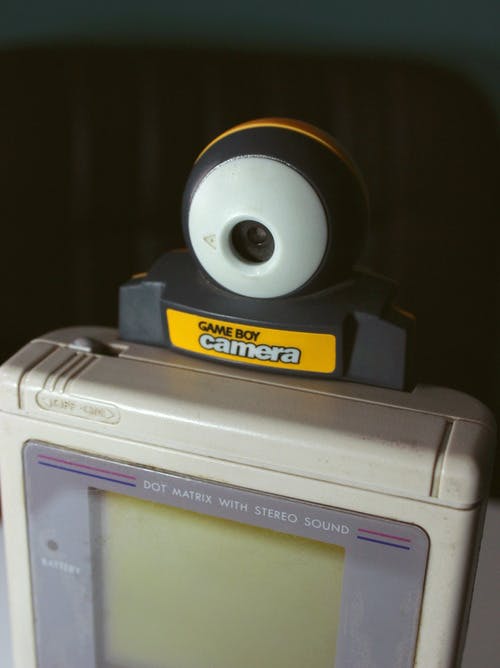 Yes, decades before front-facing cameras on Smartphones became the norm, there was actually a camera accessory for your Game Boy. Granted, the photographs it took had all of the resolution of ASCII art, but it was something. 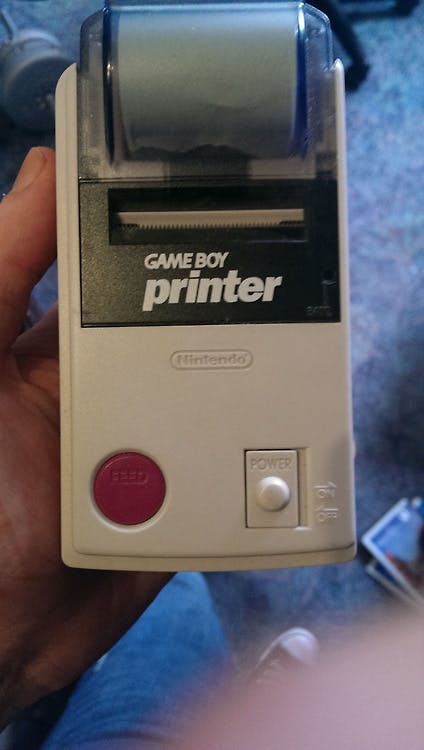 The Game Boy Printer was unique because they didn’t even release this for the NES or Super NES consoles (which would have been great for the latter system, what with Mario Paint and all). Resembling cash register receipt paper, the Game Boy Printer allowed you to print out the archaic selfies taken with your Game Boy camera and also figured into certain titles. 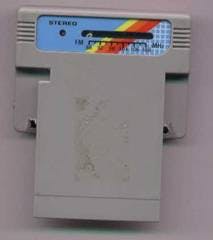 That’s right: Why walk around with a clunky Walkman or Boombox (the only two portable music devices available at the time of Game Boy’s release) when, with a simple gadget, you could turn your Game Boy into your very own FM radio?

After years of playing video games on prehistoric television sets and, of course, the Game Boy itself, it’s understandable that the average gamer would develop an early onset of astigmatism. But don’t despair! The Game Boy’s small screen can now be blown up to a far more visible size with the Game Boy magnifier, which clipped right onto the device.

It’s almost as if Nintendo was marketing Game Boy accessories for rapidly aging gamers. We needed the Light and Magnifier accessories to see better; now, we need the amplifier to increase the sound. This also served the dual purpose of annoying the hell out of our parents by blaring the 8-bit bleeps and bloops out at a much higher volume. 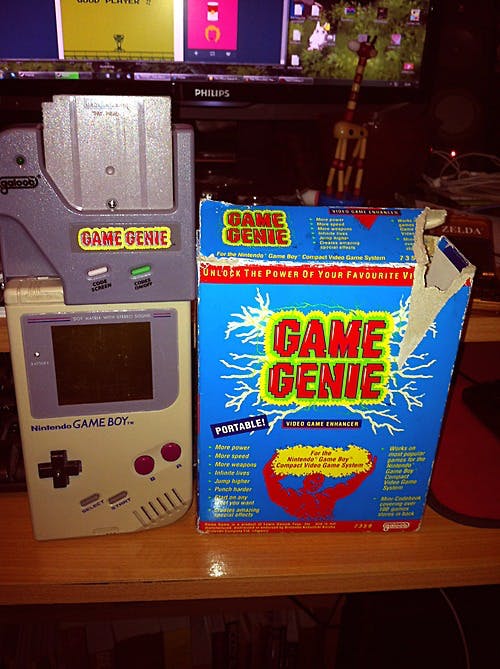 Thank goodness for the Galoob corporation. The programmers at the toy company made sure that we could cheat at video games, allowing us to explore new worlds and stand up to enemies without fear of death or running low on resources. As they had with the NES and Super NES consoles, Galoob released a version of its “video game enhancer” Game Genie for the Game Boy. 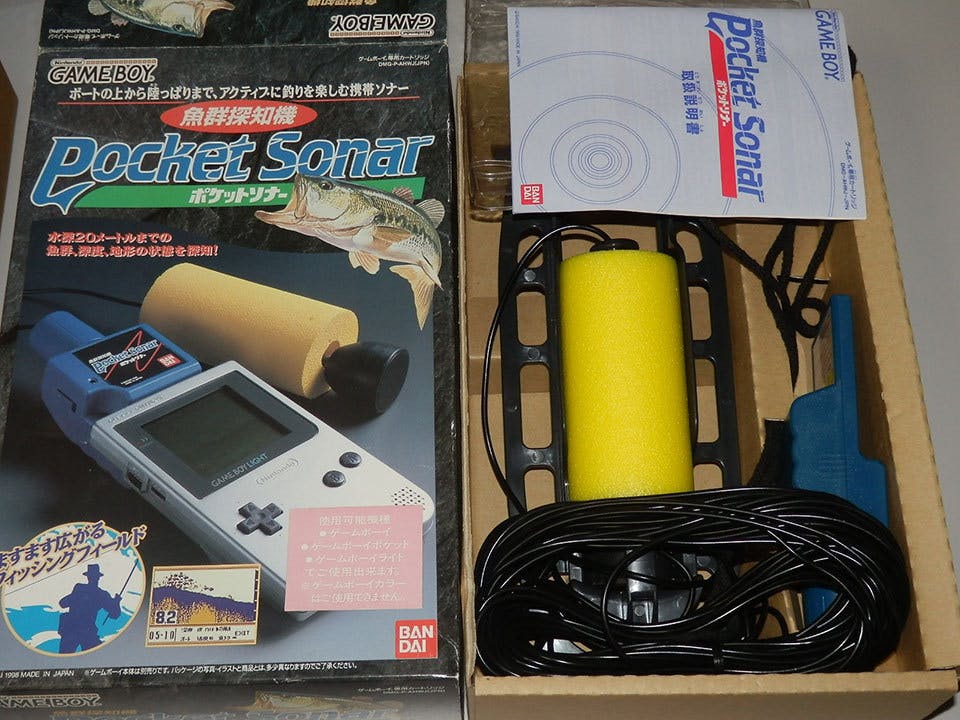 Nintendo tried a number of ways to make the Game Boy a useful tool as opposed to a portable distraction piece. One way it did this was with the Game Boy Sonar, which plugged into your system and allowed you to detect all of the fish within a certain radius. It was released only in Japan, as Americans either cared about fishing or video games–but never both at the same time. 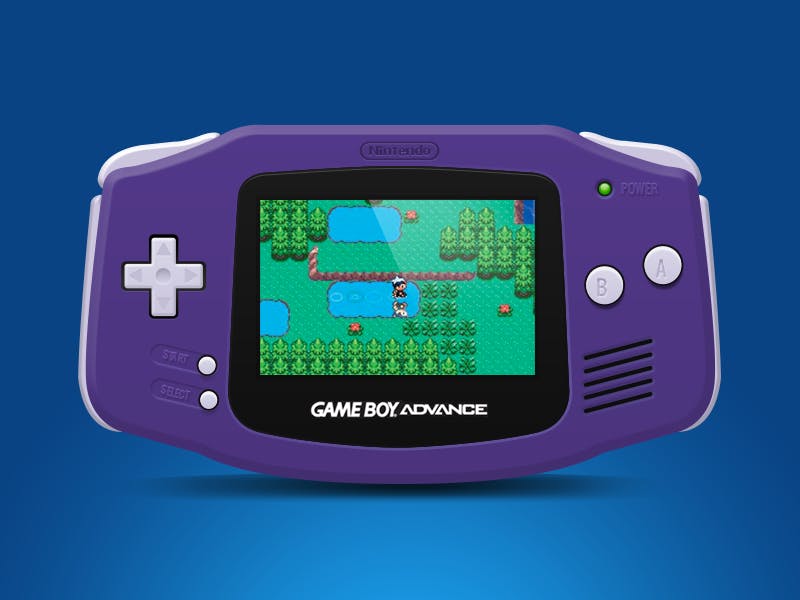 The Game Boy Advance, released in 2001, was Nintendo’s first true competitive redesign of its famous handheld system. Flipping the view to a horizontal position, the Game Boy Advance included everything from wireless adapter technology to backwards compatibility. It was a very appropriate successor to the company’s line of DS (and later 3DS) models.

Not only could the Game Boy Advance play video games, but it could also play video! Game Boy Advance video cartridges, the first of which were released in 2004, allowed players to watch movies and other videos right on their devices. 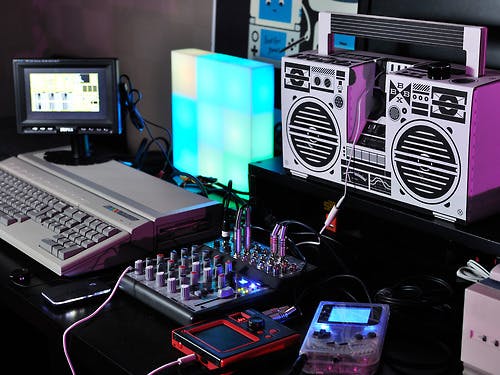 25) Game Boy as a musical instrument

Are you a fan of the “chiptunes” style of music? Yeah, we didn’t think so. Nevertheless, chiptune and other electronic “retro” music is renowned for working Game Boy’s assortment of unique bleeps and bloops into songs.