Remember that kid in elementary school that claimed his uncle worked at Nintendo and brought over some of the coolest and rarest games from Japan? That lying twerp has nothing on Ahmed Bin Fahad. 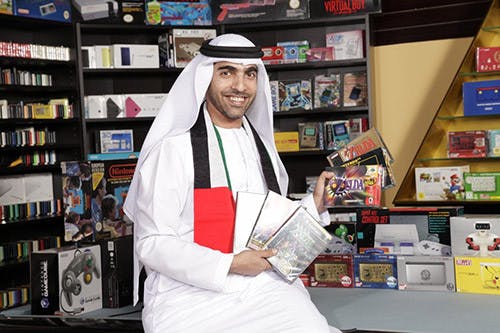 Fahad started amassing 8,000-plus piece collection after he played a game at his uncle’s house as a kid. He begged his parents to get him a game console, and a year later he got one. That’s when his obsession began with collecting all things Nintendo.

Fahad has spent over 1.5 million durham, or $408,000 U.S. dollars, on buying Nintendo merchandise. In an interview with 7 Days in Dubai, he said that his mission isn’t just personal, but about dispelling myths about Arabs.

“It is a very expensive hobby, but I wanted to set this record to give a message to the world that Arabs are not only interested in speeding cars and flashy things,” Fahad said.

Fahad is the most hardcore of collectors, one that buys two of everything. One for use and one for display.  “Sometimes if I find a stock of five or six consoles I buy them all just in case any of them are damaged—then I would have spare parts.” He has preserved everything he has purchased over the past 20 years. Talk about dedication.

In real life, Fahad works for Dubai’s police force, and clearly makes enough income to fuel his passion. We wonder if he owns a Blockbuster Gameboy Printer kiosk.