This was Nintendo’s first, big news blast for 2015

The New Nintendo 3DS XL hits stores on Feb. 13, followed by a flood of new Amiibo figures that interact with a greatly expanded list of games. Nintendo fans are going to need deep wallets!

Nintendo spread the news this morning via a Nintendo Direct event, one of the series of virtual press conferences that have become the company’s primary conduit for delivering info to its fans. 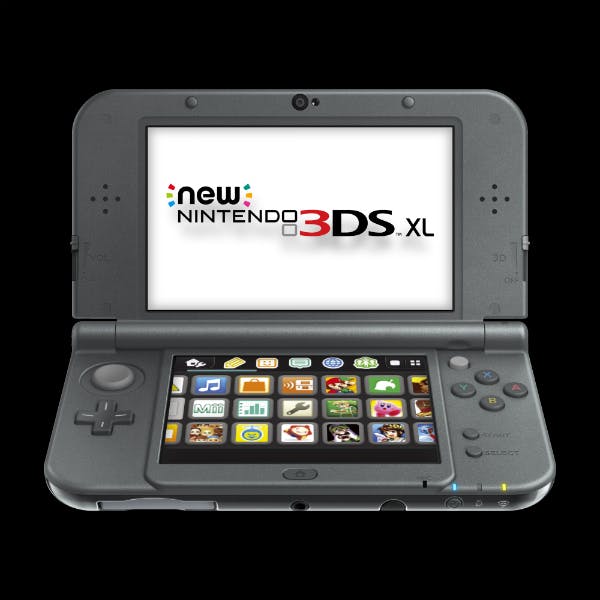 Just as important an improvement as the second analog stick is the new face-tracking technology embedded in the New Nintendo 3DS. The glasses-free 3D effects on existing 3DS units only work within a very narrow cone relative to the handheld’s screen. Tilting your head to either side ruins the effect. The New Nintendo 3DS uses head-tracking to adjust the 3D effect and make it available over a much wider angle.

Between the head-tracking and the increased size of the screen, the 3D effects on New Nintendo 3DS XL ought to be much more viable for players who don’t feel like squaring themselves up to the screen and not moving from that position.

Nintendo announced two themed versions of the New Nintendo 3DS XL hardware, for Monster Hunter 4 Ultimate and The Legend of Zelda: Majora’s Mask 3D, that will also be released on Feb. 13. The Zelda-themed hardware will cost $199.99, the same as the other two units. The Monster Hunter 4 Ultimate themed-model, available only at GameStop, will come packaged with the game pre-installed, and will cost $229.99.

There are two aspects of the New Nintendo 3DS XL that will undoubtedly get some fans in a lather. First, the hardware will not ship with an AC adapter. Consumers will have to buy a charger separately, or can use the charger included with existing 3DS and 2DS handhelds. That’s fine for existing 3DS players, but it mandates a second, mandatory purchase for everyone else.

Nintendo’s Amiibo figures are not only collectibles for their own sake—the molds and paint jobs are nice—they also interact with Nintendo games to add functionality. The total number of available figures and games they interact with were few in 2014. The other, overarching news delivered this morning by Nintendo is an expansion of both the number of Amiibo, and the games they work with.

Waves of Amiibo releases will continue to be themed to specific games. The first wave of Amiibo released in 2014 were themed to Super Smash Bros., and that was the game they interacted with. Some of the upcoming Amiibo like Pac-Man, Wario, and the Pokémon Charizard will continue the SSB line. The following wave will be themed to Super Mario Bros. and include Mario, Luigi, Peach, Yoshi, Bowser, and Toad among others.

Of course all those add-ons add up.

Kirby and the Rainbow Curse (release date Feb. 20), last year’s Captain Toad: Treasure Tracker, Mario Party 10 (released date March 10) will all make use of Amiibo figures. The New Nintendo 3DS XL will also be able to interact with Amiibo figures, by placing them on the second, bottom screen. Upcoming 3DS tactics game Project S.T.E.A.M. will be able to use the Amiibo for characters from the Fire Emblem series, for example.

If you want to figure out which Amiibo work with which games—some Amiibo will work with up to three different titles—Nintendo has posted a Amiibo compatibility chart here.

Nintendo also announced new Wii games like Super Mario Galaxy 2 and Punch-Out! that will work on Wii U without having to load the virtual Wii console, as well as plenty of details about the upcoming shooter game Splatoon, the introduction to Hyrule Warriors of characters from The Legend of Zelda: Majora’s Mask, and teasers for a slew of Wii U and 3DS games.

You can watch today’s entire Nintendo Direct presentation here for all the fine details.